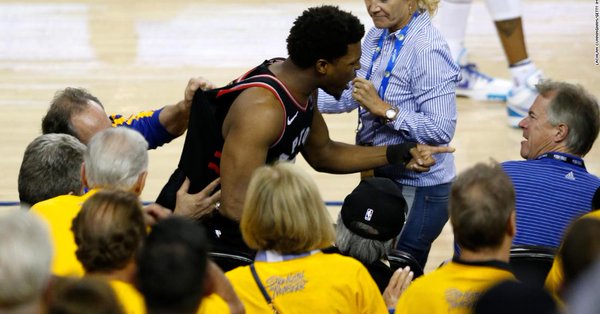 Mark Stevens, a billionaire investor for the Golden State Warriors, has been banned from the remaining games of the NBA playoffs after shoving Kyle Lowry during Game 3.

Kyle Lowry was shaking his head after a courtside fan pushed him when he fell into the crowd. pic.twitter.com/5SwQv3hdnN

On Wednesday evening, Lowry was trying to capture a loose ball and jumped into the stands to get it. The Toronto Raptors point guard was then shoved by Mark Stevens, who was sitting in the front row. Stevens pushed Lowry despite the fact that no contact had been made between the two men. Lowry called for security and Stevens was escorted out of the Oracle Arena in Oakland, California where the game was being played.

The Warriors confirmed Stevens’ identity and banned him from further games Thursday.

“Mr. Stevens’ behavior last night did not reflect the high standards that we hope to exemplify as an organization,” the statement said. “We’re extremely disappointed in his actions and, along with Mr. Stevens, offer our sincere apology to Kyle Lowry and the Toronto Raptors organization for this unfortunate misconduct. There is no place for such interaction between fans — or anyone — and players at an NBA game.

“Mr. Stevens will not be in attendance at any of the remaining games of the 2019 NBA Finals.”

Lowry commented on the incident following the game in which the Raptors won 123-109.

“He knew the rules more than just the average person sitting watching the game courtside so for (that’s) something needs to be done ASAP!” James said in an Instagram post. “A swift action for his actions.”

🗣There’s absolutely no place in our BEAUTIFUL game for that AT ALL. There’s so many issues here. When you sit courtside you absolutely know what comes with being on the floor and if you don’t know it’s on the back on the ticket itself that states the guidelines. But he himself being a fan but more importantly PART-OWNER of the Warriors knew exactly what he was doing which was so uncalled for. He knew the rules more than just the average person sitting watching the game courtside so for that Something needs to be done ASAP! A swift action for his actions. Just think to yourself, what if @kyle_lowry7 would have reacted and put his hands back on him. You guys would be going CRAZY!! Calling for him to damn near be put in jail let alone being suspended for the rest of the Finals all because he was protected himself. I’ve been quite throughout the whole NBA playoffs watching every game (haven’t missed one) but after I saw what I saw last night, took time to let it manifest into my thinking 🧢 I couldn’t and wouldn’t be quiet on this! #ProtectThePlayers #PrivilegeAintWelcomeHere