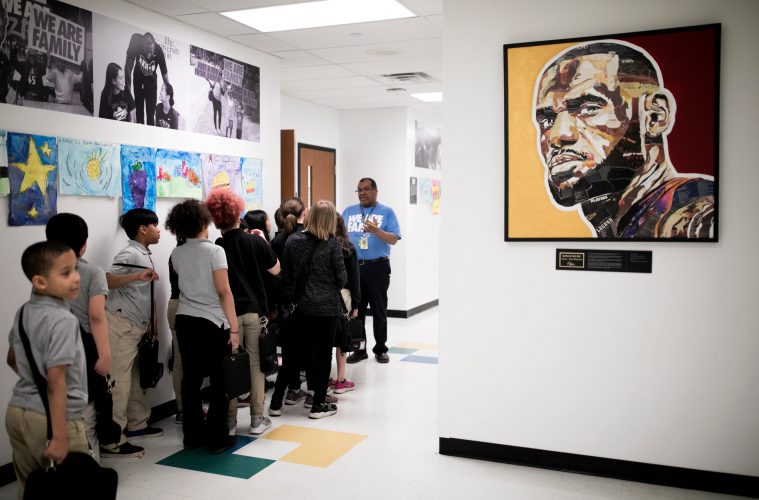 The New York Times profiled James’ “I Promise School” Friday and found that students who were once considered “unredeemable” are now outpacing their peers across Akron. The achievement gap is now being closed after the inaugural 240 students finished with Measures of Academic Progress testing showed that they scored in the 99th growth percentile of the evaluation association’s school norms. The district said that the students’ test scores increased at a higher rate than 99 out of 100 schools nationally.

“These kids are doing an unbelievable job, better than we all expected,” James said in a telephone interview with The Times. “When we first started, people knew I was opening a school for kids. Now people are going to really understand the lack of education they had before they came to our school. People are going to finally understand what goes on behind our doors.”

James also took to Instagram to share with the world just how happy he was with how the students were progressing. The NBA star posted a video that featured the kids talking about their improved test scores. He thanked the faculty and staff for encouraging and nurturing their minds.

“Proud is an understatement. I honestly could not wait to share this news when I heard it. Kids you are smart, amazing, talented, and nothing short of inspirational!” the LA Lakers star wrote.

“Teachers & all the staff [heart emojis]. Ya’ll are the right ones, the real ones on this journey changing lives & numbers don’t lie, we’re only going to keep getting better. Let’s keep GROWING and changing the game.”

PROUD ‼️‼️‼️ is an understatement. I honestly could not wait to share this news when I heard it. Kids you are smart, amazing, talented, and nothing short of INSPIRATIONAL! 9-5 every. day. Teachers & all the staff ❤️❤️ ya’ll are the right ones, the real ones on this journey changing lives & numbers don’t lie 🤷🏾‍♂️ we’re only going to keep getting better. Let’s keep GROWING and changing the game @ipromiseschool 🚀 #thekidsfromakron👑 #wearefamily ❤️ #stillmoretocome #ipromise💪🏾

I Promise is a public school operated and funded by the district with $2 million. However, the LeBron James Family Foundation has provided about $600,000 in financial support for additional teaching staff to help reduce class sizes, and an additional hour of after-school programming and tutors. It launched in July 2018 amid fanfare and skepticism. Most of the students are of color, lower class and considered irredeemable.

“We are reigniting dreams that were extinguished — already in third and fourth grade,” Brandi Davis, the school’s principal, said. “We want to change the face of urban education.”

The third and fourth graders were admitted through a lottery.  They were identified as performing in the 10th to 25th percentile on their second-grade assessments.

“These were the children where you went and talked with their old teachers, and they said, ‘This will never work,’” Dr. Michele Campbell, the executive director of the LeBron James Family Foundation, said. “We said give them to us.”

The students are known as the “chosen ones” in a nod to James. The school is expected to serve 720 students in third through eighth grade by 2022.

“While this school is in its infancy, we look forward to an extended review of the many indicators, which will confirm any growth, understanding that one or two tests do not tell the whole story,” Pat Shipe, president of the Akron Education Association, said.