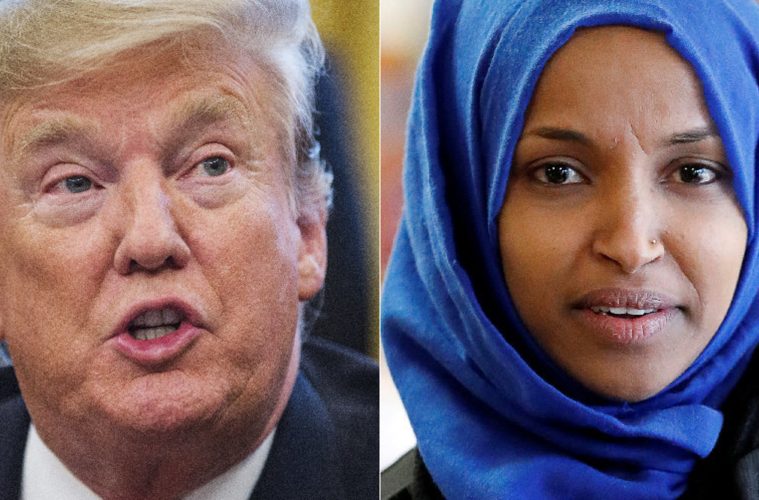 Rep. Ilham Omar said death threats against her have spiked due to an inflammatory video about 9/11 that was shared by President Donald Trump on Twitter.

The president tweeted a video Friday in which captioned “WE WILL NEVER FORGET!” above a video of Omar’s remarks repeated along with ominous music, played over images of the World Trade Center engulfed in flames.

WE WILL NEVER FORGET! pic.twitter.com/VxrGFRFeJM

Conservatives criticized one of the first Muslim women elected to Congress in regards to remarks she made about the 9/11 attacks. At a Council on American-Islamic Relations event in Los Angeles event on March 23, she stated that  “some people did something” in reference to the Sept. 11, 2001, attacks that killed nearly 3,000 people.

Omar has insisted that her remarks were taken out of context and that she did not intend to minimize the terrorist attack. However, critics and Trump seized on the controversy which has now placed her life in increased danger. The video Trump tweeted was pinned to his profile at one point and has been viewed more than 10 million times as of Monday morning.

“I have experienced an increase in direct threats on my life – many directly referencing or replying to the President’s video,” she said in a statement Sunday night.

Omar continued her statement by declaring that right wing extremists were being encouraged by Trump. She also thanked the Capitol Police, the FBI, the House Sergeant at Arms, and the Speaker of the House for their attention to these threats in her statement.

“Violent crimes and other acts of hate by right-wing extremists and white nationalists are on the rise in this country and around the world,” Omar said. “We can no longer ignore that they are being encouraged by the occupant of the highest office in the land.”

“We are all Americans. This is endangering lives. It has to stop.”

We are all Americans. This is endangering lives. It has to stop. pic.twitter.com/gwB2kDUIRp

Speaker of the House Nancy Pelosi issued a statement in which she said that Omar’s safety was a top priority.

“Following the President’s tweet, I spoke with the Sergeant-at-Arms to ensure that Capitol Police are conducting a security assessment to safeguard Congresswoman Omar, her family and her staff,” Pelosi said in a statement. “They will continue to monitor and address the threats she faces.”

“The President’s words weigh a ton, and his hateful and inflammatory rhetoric creates real danger. “President Trump must take down his disrespectful and dangerous video.”

Omar has had many come to her defense, insisting that the backlash proved the point of her speech. Omar has maintained that Muslims have been blamed as a whole for the 9/11 event. She invoked former President George Bush to prove her assertion.

“The people — and the people who knocked these buildings down will hear all of us soon!” President George W. Bush

Was Bush downplaying the terrorist attack?

Rep. Rashida Tlaib, the other first Muslim woman elected to Congress, accused the Democratic party of using her and Omar as tokens.

“They put us in photos when they want to show our party is diverse. However, when we ask to be at the table, or speak up about issues that impact who we are, what we fight for & why we ran in the first place, we are ignored. To truly honor our diversity is to never silence us,” Rep Rashida Tlaib tweeted.

They put us in photos when they want to show our party is diverse. However, when we ask to be at the table, or speak up about issues that impact who we are, what we fight for & why we ran in the first place, we are ignored. To truly honor our diversity is to never silence us. https://t.co/7T1OlwS1YG

Former Texas Rep. Beto O’Rourke, a 2020 presidential candidate, called Trump’s tweet an “incitement to violence.”  This was a charge that Sarah Sanders, White House Press Secretary, pushed back against during an appearance on “Fox News Sunday”.

“That was one of the most horrific moments in American history and for her to talk about it in such a dismissive way is frankly disgusting and abhorrent, and I’m glad the president is calling her out and holding her accountable for it,” Sanders said.