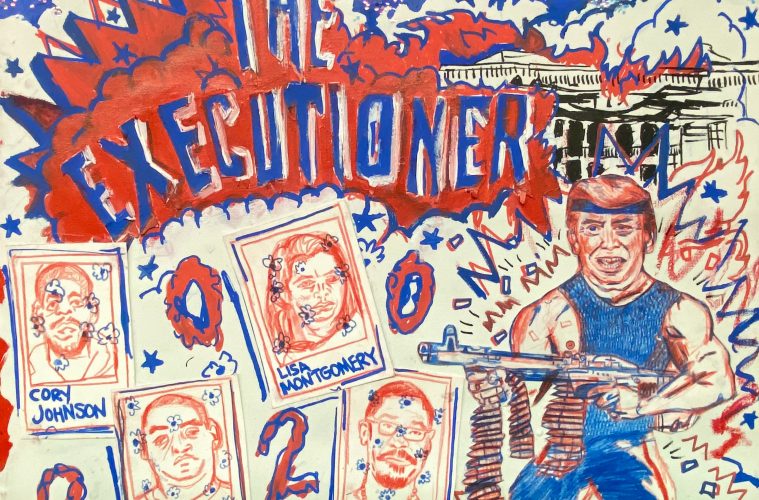 Trump is the first president in over 17 years to execute prisoners at the Federal level. Why would Trump spend his final days in office on a killing spree?  In 2020, Trump has presided over the tawdry spectacle of a ‘first world nation’ clamoring to cram in as many state executions before the clock runs out on his administration in January 2021. Trump’s unseemly thirst for murder has unleashed a reign of terror on federal death row prisoners. How did we get here? In July 2019, Attorney General Wiliam Barr cleared the way for the federal government to resume executions of death row inmates by issuing an addendum to the federal execution protocol as well as issuing instructions for the scheduling of federal executions for the first time in 17 years.  Whilst there is little doubt that some of the accused are guilty of heinous crimes, there is no evidence that the imposition of the death penalty reduces crime.

Amnesty International’s Margaret Huang called the Trump administration’s decision to restart executions ‘outrageous’. According to The Death Penalty Information Centre End of Year Report the Trump administration is acting against the previous precedent – all previous presidents have halted federal executions during the lame-duck period of their presidency as well as the fact that increasing numbers of Americans are against the death penalty.

The strongest argument against the death penalty is America’s broken criminal justice system itself. Whilst Black people make up 13% of the general population they make up a staggering 42% of those on death row.  This gross, criminal over-representation of Black people on death row is likely to follow the pattern of other aspects of the now-discredited American criminal justice system. Black people are criminalized for acts that others are offered therapeutic support for. Witness the war on drugs vs the opioid crisis – same problem different demographic.  The jury’s penchant for convicting Black men on witness testimony alone is not an aberration but rather a systemic outgrowth of a criminal justice system rooted in the dehumanization of Black people. A look at the number of innocent people that were sentenced to death and subsequently exonerated in  America should cause everyone to pause. According to the Equal Justice Initiative since 1973, 172 people on death row have been exonerated. America’s flawed, discriminatory, criminal justice system can not and should not be trusted with a penalty as final as death. Sherrilyn Ifill, President, and Director-Counsel of the NAACP Legal Defense and Educational Fund called for an end to the death penalty because of the discriminatory and flawed criminal justice system.

“LDF has long opposed the death penalty. Our founder, Thurgood Marshall, defended many Black men who had been sentenced to death in the Jim Crow South, and since that time we have represented multiple people on death row. Numerous innocent people have been executed due to this nation’s discriminatory and severely flawed criminal justice system, as well as because of human error. This must end”.

So why has Trump become so committed to the Death penalty? Is it the final stand in the culture wars? Payback for voting him out? Perhaps, but the seeds of Trump’s mandated killing spree are rooted deeply in Trump’s long term support of the death penalty. Who can forget his full-page advert asking for the exonerated five to face the death penalty?  The Trump administration’s broadening of the manner in which executions can take place to include the barbaric use of ‘firing squad’ seems to be Trump’s attempt to cultivate an image of himself as a gun-toting executioner indiscriminately killing inmates on death row. Seeking vengeance for crimes committed or in some cases not committed by those on death row. Vengeance is not just a Trumpian trait it is an American trait.

Federal executions by the Trump administration

A number of federal executions are scheduled in January 2021 including Lisa Montogomery, 12th January, Correy Johnson on 14th January, and Dustin Higgs on the 15th January just 5 days before the inauguration of Joe Biden as the 46th President of the United States of America. There are many who worked hard to portray this vengeful, racist president as a reformer. Who deliberately played up the impact of his First Steps Act whilst ignoring Trump’s  Justice department’s steadfast undermining of civil rights and rollback of consent decrees designed to hold the police accountable.

The Trump administration’s approach to justice has been consistent, from his abandonment of police reform, endorsement of violent arrests, the rollback of civil rights legislation to his reintroduction of the death penalty at the federal level. Justice for the Trump administration is color-coded.  It is no coincidence that the final executions are all of Black men and we can expect the final tally of executions to disproportionately feature black men.  Trump is a man consumed by a xenophobic anti-blackness.

Trump is at his heart a vengeful man who sees little value in the lives of people who are not like him. Little value in the lives of Black people. The indecent rush to execute those on death row appears to be driven not by any desire for justice or even retribution but rather as an act of theater as red meat to his base. Trump’s Death row executions: a gruesome finale to the Trump presidency.