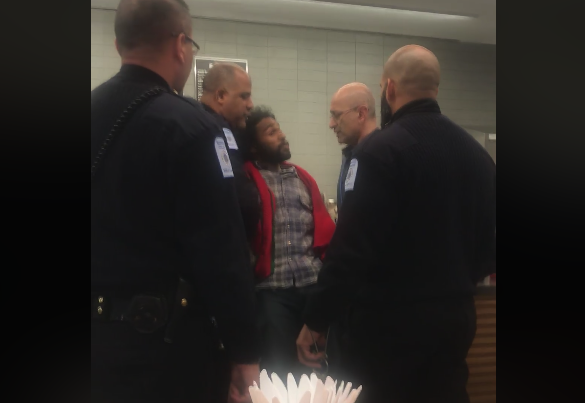 Six Barnard Public Safety officers involved in the physical confrontation of a Black student have been placed on paid administrative pending investigation.

The Columbia Daily Spectator reported  that administrators at the school made the disciplinary announcement to students Friday. The officers physically restrained Alexander McNab, CC ’19. McNab was pushed against a counter after he declined to show his Columbia University ID inside the Milstein Center for Teaching and Learning on Thursday night.

For context: Columbia students have access to Barnard libraries. After 11 p.m., students are supposed to show their IDs to public safety before entering campus. But this rule is loosely enforced and hardly followed. I have always just nodded to the officer. Nothing like this. pic.twitter.com/ihStqSAovA

McNab, who is Black, said that the officers follow him into the Milstein Center when he declined to show his Columbia ID at Barnard’s main gates. The officers wanted to verify that he was an active student at Columbia. Barnard is a liberal arts college for women in partnership with Columbia.

He told the Spectator that white students were not asked to show identification and was further upset by the inconsistency in enforcing the rule for entry. McNabb also added that he has previously been asked to show ID while on campus and was once asked to prove he wasn’t homeless. These altercations made him wary about showing his ID upon demand.

“Because of all of that, I said ‘Nah, that’s not happening again this time,’” McNab told Spectator in regard to showing his ID.

Nonetheless, McNab was still surprised by the violent nature of Friday’s confrontation.

“What I didn’t see coming was when they got the other Public Safety officer to come to the side and pin me to the counter,” he said. “I hadn’t made any threats; all I said was I’m not going to show you my ID. I don’t understand where that came from.”

The clip quickly went viral and outrage spread across social media. Barnard and Columbia held listening sessions for students to express their thoughts on the manner which many felt were rooted in racism. Two statements were released that did not directly reference anti-Blackness.

“We are taking this very seriously and look forward to further engaging the community on this topic. Barnard values inclusivity and is committed to ensuring a safe, respectful, and welcoming place for each and every member of our community, regardless of race, religion, ethnicity, gender identity or expression, sexual orientation, or national origin,” the second statement read.

A protest was held on Friday to address what was deemed to be racial profiling. The organizers of the protest were angered by Bernard and Columbia choosing to frame the incident as anything other than racist.

“This is an informal protest to let Barnard know that we won’t forget this or be placated, and that it will take work to change the conditions that led to this. Feel free to speak if you want to, bring chants, etc. This is a space that will center Black students. White people: show up, and please be aware of the space you’re taking up,” the post said.

“Besides looking out the window a couple of times, the Public Safety officer on duty has not acknowledged the protest happening outside his office.” Photo taken by @bwog at the end of the protest, which ended about an hour ago. pic.twitter.com/PQWsFMWuZg

Sian Leah Beilock, President of Barnard, released a statement Sunday in which she formally apologized for the encounter. She pledged that the school would do all that it could to ensure equality and safety.

“I sincerely apologize to the Columbia student involved and have reached out to him to better understand his experience on campus. I also apologize to the students who witnessed it and were treated disrespectfully, and to all who have felt its impact,” she wrote.

“The confrontation puts into stark relief what some members of the Barnard College community, particularly people of color, have been saying about their relationship with the Office of Public Safety and the lack of trust they have in it to keep them safe. We must ensure that public safety officers act equitably toward all and that the community trusts this will occur. That work is now underway, effective immediately.