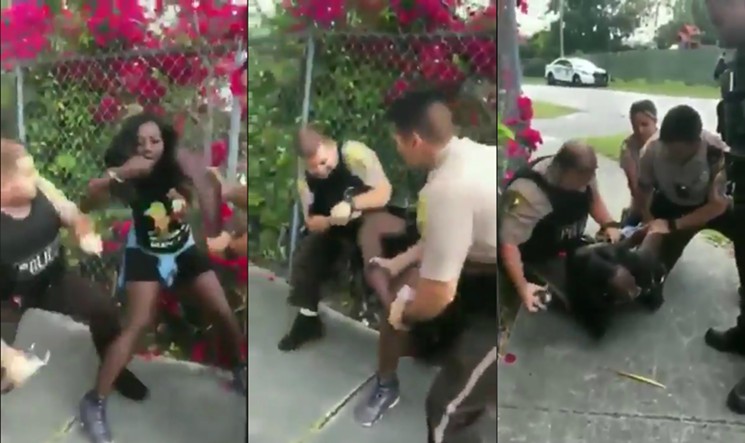 A video that has gone viral showed Miami police officers aggressively arresting a Black woman who had called the authorities after a gun was pulled on her.

The clip, which exploded on social media Wednesday, showed one officer instructing the woman to “please calm down.”

“She needs to be corrected, if anything,” another Miami-Dade Police officer responded.

The woman insisted that she was a victim of a crime, not guilty of one.

“Why do I have to be corrected when my life and my daughter’s life was just threatened?” the woman asked.

It was at this point that the officers moved towards the unidentified woman and grabbed her wrists before handcuffing her. She was then put into a headlock and pushed to the ground.  The woman who was filming the incident begged the officers to stop but they did not.

“I just want to call my kids; my phone is dead,” the woman said as she was being arrested. “I got a gun pointed in front of me; I’m stressed out.

Juan Perez, Miami-Dade Police Department Director, issued a statement on Twitter over the actions of the officers involved. He stated there would be accountability.

“Upon becoming aware of the video posted on social media, an immediate inquiry was initiated which resulted in the involved officer being relieved of duty and of his role as a field training officer. An investigation into the entire incident is currently ongoing and upon its conclusion, I will hold those that violated any of our policies and/or procedures accountable for their actions or lack thereof,” he tweeted.

One of the officers involved in the arrest has been relieved of his duties.