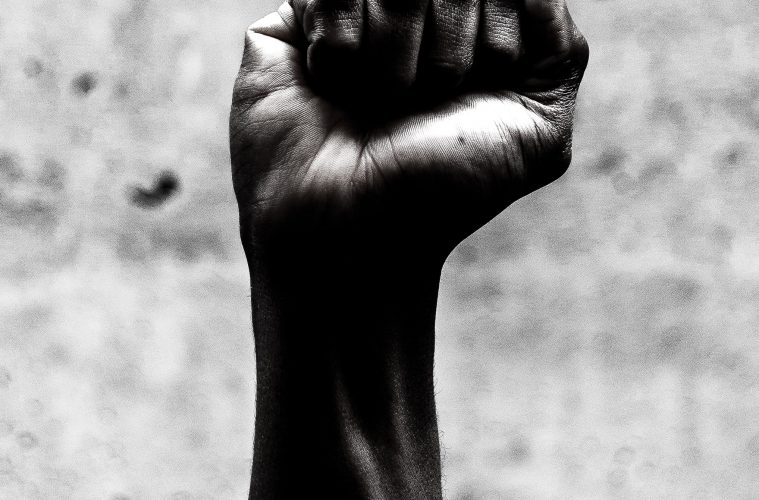 How the Justice Committee is Protecting New Yorkers from Police Violence. An interview with Simone Gamble

“You can’t use policing to solve public health problems…What communities need is more education, public services notices and engagement by social services and the caring community!”

– Simone Gamble of the Justice Committee

Social-distancing a word that was unfamiliar to many just a couple of months ago is now part of the everyday lexicon for millions of Americans. A health pandemic conjures up pictures of the sick being nursed back to health, quiet conversations between doctor and patient, but this pandemic is different.

The decision by politicians to put the NYPD in charge of social distancing enforcement poses a unique set of challenges for communities of colour. A quick look at the history of the NYPD would have made even the most disinterested observer pause for thought but not Mayor De Blasio.

The Role of the NYPD in the era of COVID 19

Policing by consent in Black communities does not come easily to the NYPD. A plethora of video footage showing officers brutalizing minorities makes this crystal clear. We spoke to Simone Gamble of the Justice Committee about what COVID 19 means for policing in New York. We asked Simone how the Justice Committee feel about the NYPD having responsibility for enforcing social distancing? “You can’t use policing to solve public health problems,” Simone said. “What communities need is more education, public services notices and engagement by social services and the caring community,” Simone explained.

"The moment @NYCMayor & @NYGovCuomo engaged NYPD in #SocialDistancing, what did they think was gonna happen, when they threw the NYPD at a public health crisis instead of public health workers?" -Victoria Davis, #DelrawnSmall's sister. Get NYPD out of SocialDistancing enforcement pic.twitter.com/ZWb2g6XfMZ

The NYPD’s discredited, racially-biased, implementation of “stop and search” continues to reverberate around the city and has made communities of colour wary of the NYPD’s ability to apply the law impartially.

“The pandemic has caused fewer people to be on the street whilst simultaneously affording the police greater responsibility.” Simone said, “The work of our copwatch program is critical to keeping the police accountable during the COVID 19 pandemic and afterwards. “

The viral video of New York City police officer Francisco Garcia supports Simone’s judgement. The brutal arrest of two individuals on the initial premise of a violation of physical distancing coupled with Garcia’s violence towards Donni Wright, a bystander, is indicative of the combative relationship the NYPD has developed with the Black community.

When Officer Garcia, confronts Donni Wright. Garcia is confrontational “What are you flexing for? Don’t flex!” pointing his taser in the direction of Mr Wright. Donni has just seen Officer Garcia with his knee on the neck of a Black New Yorker.

Police charged Donni Wright, the young man who the cop with the taser takes down in this video, with Assault on a Police Officer, Resisting Arrest & Menacing.

Assault on a cop is a felony charge. I dare anybody to tell me how that is made out here. https://t.co/DnWt6FILcZ

Whilst Garcia’s actions appear egregious to Americans, for Black Americans, they represent a large swathe of their experience of policing. The argument that officers like Francisco Garcia, are an aberration, is belied by the fact that video after video of police misconduct, shows fellow officers aiding and abetting the misconduct.

Where is the accountability for the senior managers who allowed Garcia back on the streets, after seven misconduct cases against him, were settled at a total cost to the taxpayer of over $200,000? 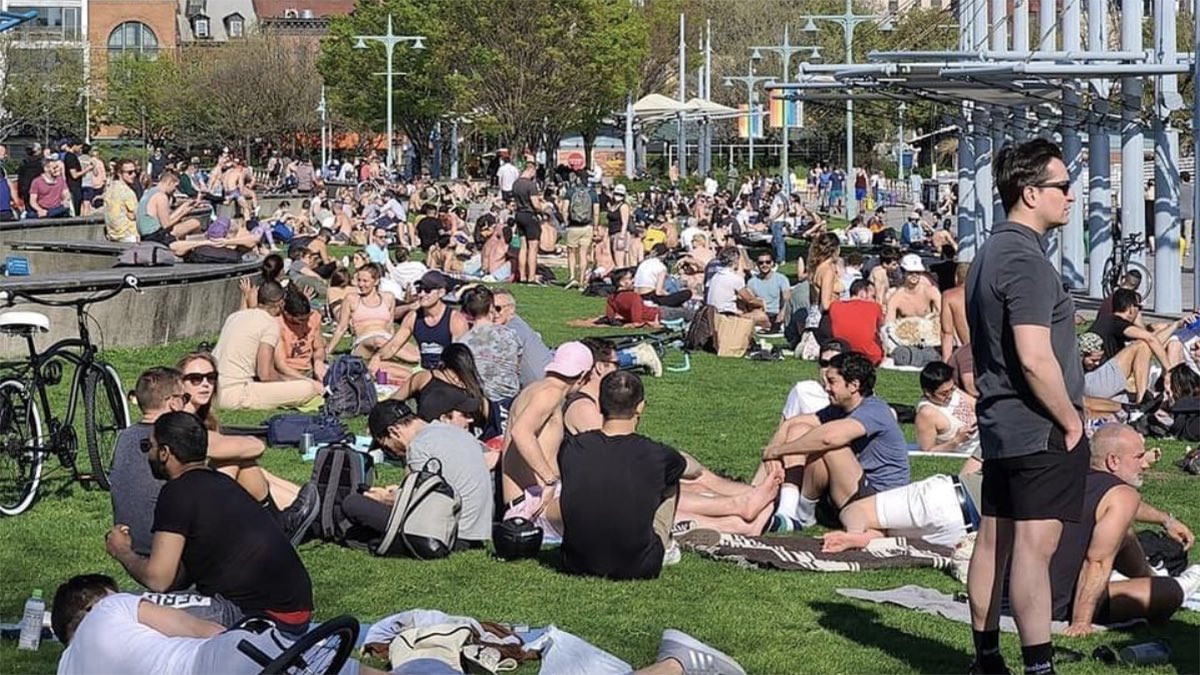 The data released by the NYPD shows that they issued a total of 374 summons for “violations of emergency procedures” between March 16 and May 5. The data concerns organisations like the justice committee as it suggests racial bias in policing. 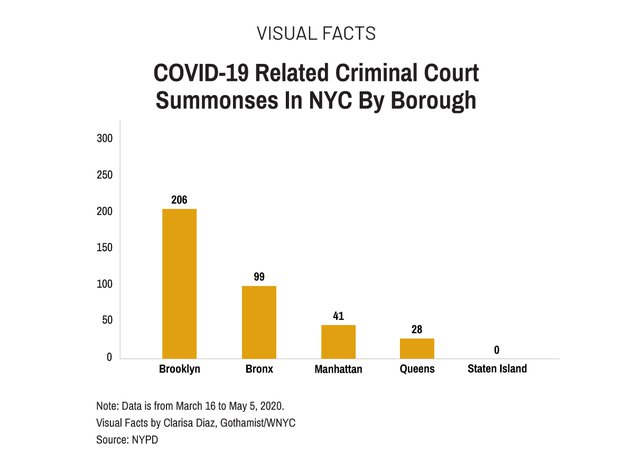 Organisations like the Justice Committee see this as clear evidence of racial bias. “There is racial bias in social distancing enforcement the data points to the police using the excuse of the pandemic to further criminalize minority communities,” Simone said. Justice Committee argues that the NYPD should not be involved in any aspect of social distancing enforcement, the effort should instead be led by health and community workers. “The focus should be on educating people rather than criminalizing them,” Simone said. 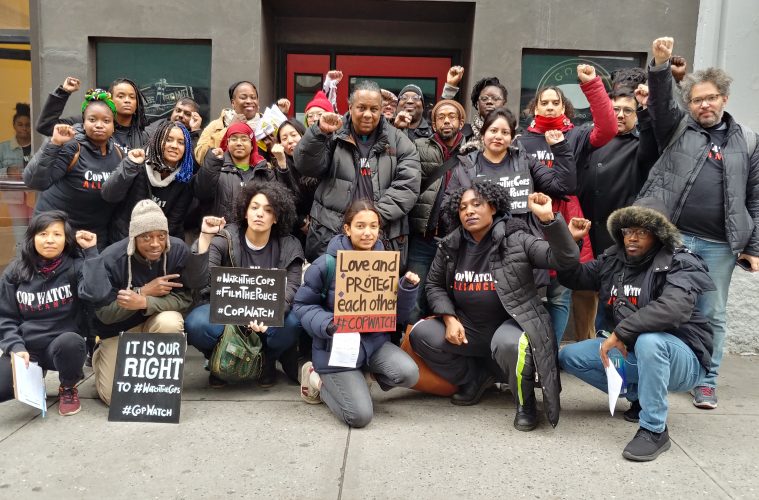 This disparity makes the work of the Justice Committee even more critical. Simone is clear that the recent spate of cases demonstrates the real value of recording the police. “Copwatch provides a valuable civic function, educating New Yorkers about how to record the police safely.” Simone continues “we are not telling people that you need to go outside copwatch and be a hero,” Simone said. “If you are going outside for an essential reason, to the grocery store, the pharmacy, or even exercising, we are asking people to look out for any kind of police interaction and to record it from a safe distance (6 feet away).”

Justice Committee is offering free online training so that the community can safely record police encounters. They hope that videos will help individuals to challenge the police version of events as well as lead to increased public disapproval, forcing the NYPD to begin to tackle systemic racism in its ranks.

In the midst of a #pandemic Black & Latinx communities are still disproportinately targeted by police. Aggressive & abusive #SocialDistancing enforcement will not make our communities safer or healthier. Join us to learn how you can fight police violence: https://t.co/Tv83a1Nukr pic.twitter.com/Fzf87jFwMF

In the light of both police and judicial bias against African Americans, video footage is a potent weapon, that helps to break through the blue wall of silence as well as media apathy. Without video footage, it is unlikely that Mayor De Blasio would have been compelled to reduce police involvement in social distancing enforcement or that the Manhattan DA would have deferred charges against Donni Wright.

The camera may be the best protection black people have in the face of police violence. The  Justice Committee is offering online training for anyone interested in taking part in safe cop watching.  To become involved contact the Justice Committee using the social media links below.

Connect with the Justice Committee