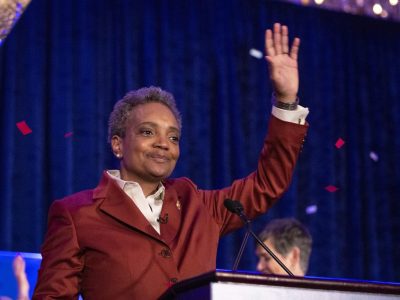 Lightfoot will become the first Black woman and openly gay mayor of Chicago. The Chicago board of elections website showed that Lightfoot won 73.7 percent to 26.3 percent of the vote with 91 percent of precincts accounted for.

Lightfoot will succeed Mayor Rahm Emanuel who chose not to run for a third term. The mayor-elect thanked Chicago, supporters and pledged to work with others in her forthcoming administration.

“In this election Toni and I were competitors, but our differences are nothing compared to what we can achieve together,” Lightfoot said. “Now that it’s over, I know we will work together for the city that we both love.”

“Today, you did more than make history,” Lightfoot said. “You created a movement for change.”

Lightfoot told The Chicago Sun Times after her victory was announced how humbled she was. She looked forward to a new era in Chicago politics.

“We were hoping, based on our polling, that we would do really well. But, this is amazing. More than I ever dreamed of. People really wanted change. They were very troubled by the negative tone of the Preckwinkle campaign. Now, people have new hope for a new beginning,” she said.

Preckwinkle called Lightfoot to congratulate her. The former school teacher said that despite her loss, history had been made.

“This may not be the outcome we wanted, but while I may be disappointed, I’m not disheartened,” she said. “For one thing, this is clearly a historic night. Not long ago, two African-American women vying for this position would have been unthinkable.”

Lightfoot will be sworn in on May 20.