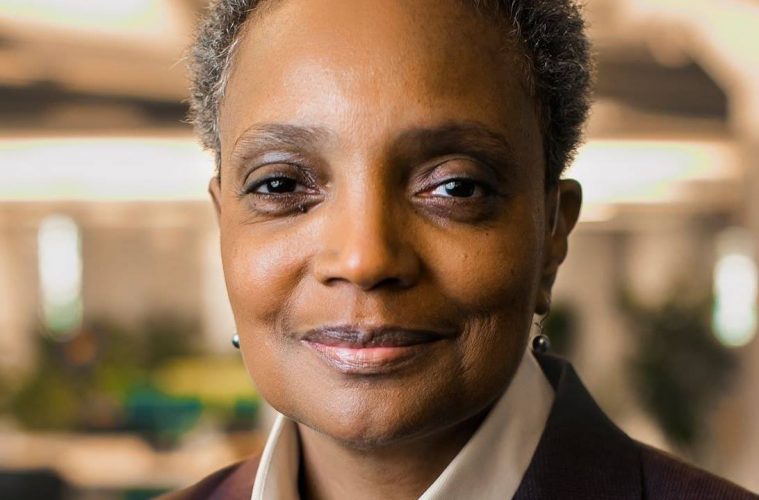 Lori Lightfoot Sworn In As Mayor of Chicago

Lori Lightfoot was sworn in as the 56th mayor of Chicago, becoming the first Black and openly gay person to lead the city Monday.

WATCH: Lori Lightfoot sworn in as mayor of Chicago.

She is the first openly gay person and first black woman to lead the city. pic.twitter.com/WJZ48PKdII

Lightfoot was sworn in with wife, Amy Eshleman, and daughter Vivian at her side during the city’s inauguration ceremony at Wintrust Arena where 8,000 were in attendance.  The former federal prosecutor, 56, was elected in April with 74% of the vote.

“In this moment, I cannot help but look at all of you and think about what lies ahead and what we can be together. I’m looking ahead to a city of safe streets and strong schools for every child regardless of neighborhood or zip code,” Lightfoot said.

Lightfoot highlighted the values she felt made Chicago a beacon. She described the city as a place where many grew old and did not flee.

“A city of sanctuary against fear where no one must hide in the shadows. A city that is affordable for families and seniors and where every job pays a living wage. A city of fairness and hope and prosperity for the many, not just for the few, a city that holds equity and inclusion as our guiding principles.”

Lightfoot declared she earned votes by promising change and would be a woman of her word.

“Well, get ready … because reform is here,” she added. “I campaigned on change, you voted for change, and I plan to deliver change to our government.”

Ann Lightfoot, 90 watches on as her daughter, Lori Lightfoot is sworn in as the 56th Mayor of the City of Chicago.

Lightfoot said that this was a time of great possibility. She was happy her 90-year-old mother could share in the experience of seeing her become Chicago’s top female and African American executive.

“She’s my role model, my champion. The woman whose dreams and high expectations for me propelled me through life — my mother, Ann Lightfoot.”

Lightfoot succeeded the unpopular Rahm Emanuel. He previously appointed her as police board president co-chair the Task Force on Police Accountability after the backlash to how the shooting death of Laquan McDonald. His eight years in office were marked by low approval ratings, tensions between the community and police in addition to the closure of 50 Chicago public schools. Emanuel decided not to seek a third time.

Lightfoot thanked Emanuel for his service but had her eye on the future. She wanted to improve the health of Chicago which has been plagued by gun violence.

“People cannot … and should not … live in neighborhoods that resemble a war zone,” Lightfoot said,.“… there is no higher calling than restoring safety and peace in our neighborhoods. We will develop a new, proactive strategy in partnership with the communities hit hardest by the scourge of gun violence.”

"Chicago's best days are still ahead." A message of congratulations from President @BarackObama to @LightfootForChi and the new @ChiCouncil members on their inauguration today: pic.twitter.com/x4bzde3rBt