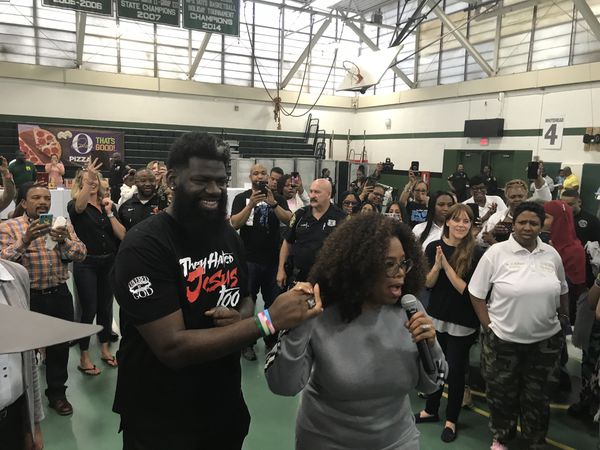 Oprah Winfrey surprised West Side High School in New Jersey with a donation of $500,000 to assist their their principal Akbar Cook with his program that keeps kids off the street.

Oprah Winfrey donated $500K to Westside High School’s "Lights On” program in NJ that is designed to keep kids off the street. pic.twitter.com/CYdkrDp4jO

Winfrey made the generous donation in a visit Friday to the school. She had heard about Cook’s “Lights On” initiative. It is a program, started three years ago, that keeps children off the street from 6 p.m. to midnight. He has also been involved in anti bullying and preventative gun violence measures.

Last September, Cook also installed a washing machine at the school as many kids weren’t able to afford washing their clothes. They chose to stay home rather than to be bullied. When the gesture went viral, Cook appeared on the Ellen DeGeneres show twice.  She gifted him $50,000 for each visit.

Winfrey found out about the efforts through a CBS News report and decided to help on May 18. She elated the gymnasium of screaming students.

“I heard about West Side and all of the great things that are happening here,” Winfrey said. “I thought, ‘what can I do?’”

Winfrey added that she had to take action after learning of Cook’s desire to improve the lives of his students.

“I was moved by his story,” Winfrey said. “Let me find this guy. Let me see what I can do to help further what he’s trying to do.”

Students were more than impressed that she took action. They felt unfairly depicted due to low grades and fights.

Cook was grateful for the mogul’s generosity and the two held hands in the parking lot.

“My kids feel like they don’t have anyone,” Cook said. “And you just took time out of your busy schedule to show me and my babies love. I’m floored. I’m truly humbled.”

“We are humbled by you,” she said in return.

Winfrey went on to commend Cook for his holistic approach to being an educator.

Cook had kept Winfrey’s visit a secret, only letting students know that someone famous was coming. He wanted to highlight that they could be in the news for more than just violence.

“We did it with love,” Cook said of Winfrey’s visit.

“It wasn’t for some nonsense or for kids getting killed. We are the trailblazers for the world to see what could be done.”