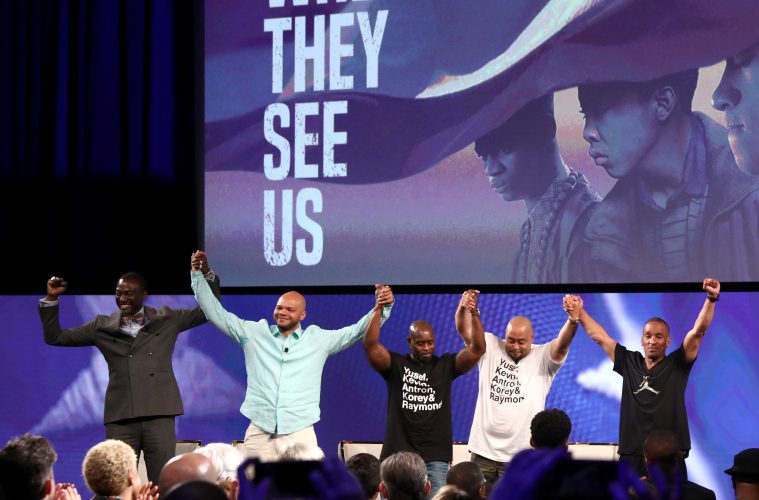 Oprah Winfrey interviewed  Ava DuVernay director and the Exonerated Five for a discussion about the renewed interest in the Central Park case Sunday.

Last night, @Oprah interviewed The Exonerated 5 and the cast of #WhenTheySeeUs. Thanks to OW for an incredible old-school Oprah Winfrey Show. The honesty of the men was breathtaking and so moving. @ChrissGardner captures our night so perfectly here. https://t.co/Gqp2g8zsex

Raymond Santana, Kevin Richardson, Antron McCray, Yusef Salaam and Korey Wise were once known as the Central Park 5, a group of Black and Brown teenage boys wrongfully convicted of assaulting and raping a female jogger in 1989. The men, now referred to as the “Exonerated Five”, appeared with director DuVernay to discuss her Netflix limited series limited series “When They See Us” based on their lives. The interview was filmed at Netflix’s FYSEE location in Hollywood and will air Wednesday night on Winfrey’s OWN and Netflix.

Winfrey brought up Linda Fairstein who has been on the receiving end of backlash since the series premiered May 31. The former lead prosecutor in the Manhattan District Attorney has been accused of unfairly railroading the men and aiding in forced confession. Fairstein resigned from various charities and was dropped by her publisher. She had become a novelist who wrote crime stories after leaving her post.

“And that accountability is happening in a way today that it did not happen for the real men 30 years ago. But I think that it would be a tragedy if this story and the telling of it came down to one woman being punished for what she did because it’s not about her. It’s not all about her,” the director said.

The Hollywood Reporter described that the five men were greeted with rounds of applause when they took the stage. Winfrey asked them to put into words the boys they used to before getting arrested, charged and convicted.

“I think about that often. My whole life changed. I went from riding a skateboard and climbing trees. The most romantic thing I did was walk around the lake and hold hands,” Salaam said.

Richardson characterized himself as naive and humble while Santana answered he loved listening to Hip Hop and sketching. He held Fairstein responsible for her actions.

“The moment the DNA comes back and it doesn’t match — nothing matches — this was her chance to take a step back and re-evaluate. That’s a pivotal moment, and she had the power to do the right thing and she fumbled,” he said.

Korey Wise, who received the harshest sentence of them all, felt that Fairstein lost her way.

“She was doing her job, and it caught up to her,” Wise said.

McCray shared that his life has been ruined by the experience. His wife has urged him into therapy.

“I’m damaged,” he told Winfrey. “I need help. I know it. The system broke a lot of things in me that can’t be fixed.… I’m struggling.”

Ultimately, they were grateful that DuVernay as a director brought the story of their injustice into greater focus.

“I’ve said to Ava, thank you for protecting us. Now we know it’s not just us, but it’s us,” Salaam said.

Watch a preview below.