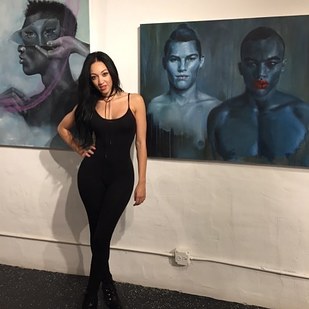 As the descendants of Africans become more familiar with the power of unity and pride in culture, more images and productions show tan, brown and dark characters and illustrations. Black pride tends to build unnecessary tension within the white community and caution in Chinese and Middle Eastern communities who operate a plethora of businesses in predominantly black communities. People of other ethnic groups have often misunderstood the idea of a black man or woman taking joy in displaying specific cultural gestures and attributes that originated from their African ancestors. Unfortunately, black people still face backlash for merely wanting to promote black business and industry or for just desiring to be in more spaces that are unique and specifically for us.

The Black Mother of Creation

Harmonia Rosales is an Afro-Cuban artist out of Chicago who faced criticism from people who were disgusted by her depictions of famous European artwork as African women. These white men and women made noise about “cultural appropriation.” However from Rosales’ explanation, it was important to display the Black woman in positions of power as a positive representation of the Black community. Removing the European patriarchal view that often mutes the unique and multi-layered attributes of African beauty, power and life. Her most controversial painting is, “The Creation of God,” which shows God as a Black woman. The images that Rosales creates inspires the thought of a time when black women were more valued.

Rosales’ brush strokes boasting of beautiful dark skin, make clear the purpose of honoring the black mother of all creation, since science has proven that all life generated from Africa. Nevertheless, Rosales has not allowed the negative comments to stop her from inspiring generations of black children and adults, hopefully for centuries after her passing.

“The Creation of God” ….we all are created in “Gods” image. #melanin #painting #art #chicago #god #clouds #oilpainting #womenempowerment

In America the ideals and beliefs about beauty are presented through media to the mass public for consumption. It is not often that the public, especially black people question what we have been told, by authority figures, friends or family members. Now is surely a time to control the image of black women, unapologetically. Rosales designed an art collection, passionately entitled; Black Imagery to Counter Homogeny (B.I.T.C.H.) Using an emboldened title to create a dramatic difference of the ideal image of womanhood and sensuality in America, which is normally portrayed as European or fair skin, it is meant to be treasured. 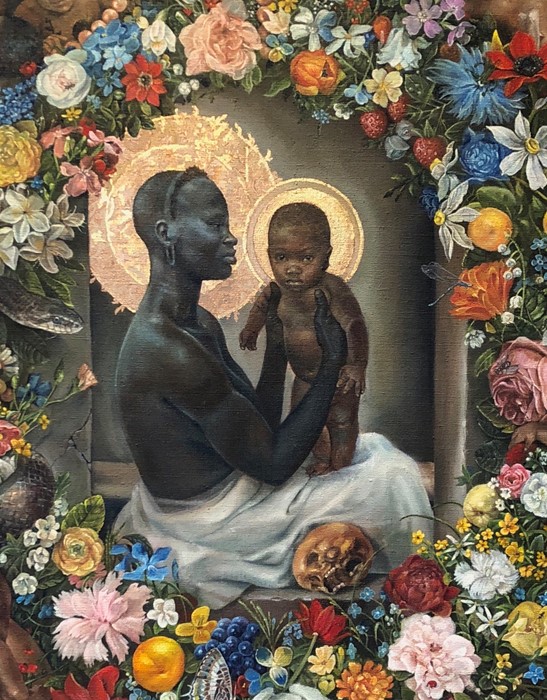 Why Did Rosales Choose to Represent God as a Woman?

The image of God was not to be recreated to match humans but instead the Bible states that humanity was  made in the image of God. It was originally a man who claimed that God is a man, so why not make the appearance of God  a woman?

“Let’s face it, creativity starting in the womb is a female attribute, ”Rosales explained, in an interview with BET.

Rosales was raised in a traditional Cuban home, with a father who demanded that she marry well, so she could be taken care of.  Rosales stuck to that thought process. In her family home her grandmother tended to the  affairs of the house while her grandfather provided for the family. Her divorce, having to refocus her life and remaining strong for her daughter, ignited her inspiration for her popular collection of paintings. With her two children depending on her, Rosales went to her foundation, the love of art, which her mother, a painter and children’s book illustrator instilled into her.

Rosales’ daughter began to notice the difference between her skin color and hair texture compared to her mothers. Her daughter began verbalizing how the fairness of her mother’s skin is close to white skin. This moment brought Rosales back to a childhood memory of hating her curly hair and covering her hair with cloths to resemble the straightness of her mother’s hair. Not wanting her daughter to grow up mimicking another person out of disapproval of her own unique and gorgeous qualities, including her brown skin and kinky hair, she created some of her signature paintings.

Gold leafing a side project when I was demanded “say cheese mommy” lol…I tend to follow the natural light in my house. 📸: Daughter 😘 #naturallight #goldleaf #artist

A Mission that Will Inspire Millions

What Rosales has done, not only for her daughter but for other young black girls, will be instrumental in the development of black womanhood. Our community needs more images and examples of positivity, that resemble people like us, through our eyes and from our stories. Having creative representations of black women, showing our pain, fears and undeniable beauty in various shapes and skin tones is required for a change in prejudices and stereotypes.

Art allows the viewer to visualize a concept, feeling or story in a way that was never once possible. With less than 300 posts and over 87 thousand followers, Rosales’s haters can have several seats, because it will not stop her shine or her creative power to encourage and uplift black women to love the skin and hair they are born with. The negative comments on social media only confirm to Rosales that more classical images of black people need to be made, to gain an understanding of the underrepresented and the misrepresented.