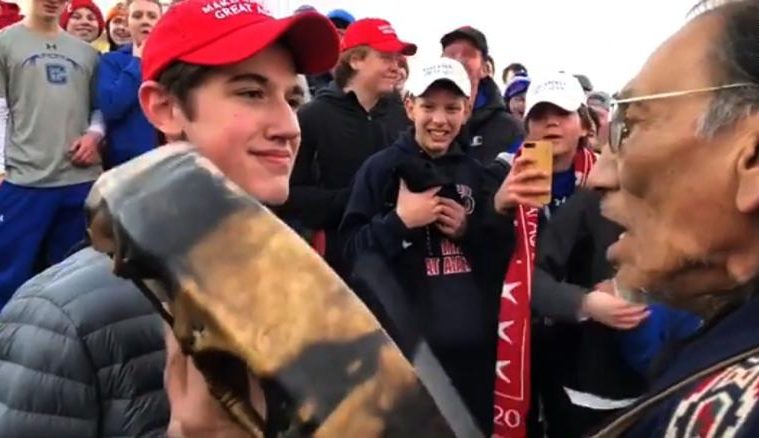 Social media erupted with outraged over the weekend when footage was shown of students from students of Covington Catholic High School in Covington, KY wearing ‘Make America Great Again’ hats jeering and taunting  Nathan Phillips, a Vietnam War veteran and Omaha tribal elder. A few did the Native American chop to taunt him.

A firsthand account further explained the tense scene. Hunter Hooligan wrote in The Cut that boys refused to let her pass. She described panic in her gut.

“I felt trapped.  There were so many of them around us that I couldn’t see out beyond them.  All I could see was cold faces full of empty laughter, boys intoxicated on their own false sense of power, control, and entitlement. But Nathan was steadfast. His drumming was constant and he exuded calm, grace, stability. He was unshaken,” Hooligan wrote.

Nick Sandmann, the teenager who was seen smirking at Phillips, released a statement denying the claims against him in the viral confrontation. He criticized attacks against his character and that death threats were now being sent to him and his family.

“I believed that by remaining motionless and calm, I was helping to diffuse the situation. I realized everyone had cameras and that perhaps a group of adults was trying to provoke a group of teenagers into a larger conflict. I said a silent prayer that the situation would not get out of hand,” he said in the statement.

“… I did smile at one point because I wanted him to know that I was not going to become angry, intimidated or be provoked into a larger confrontation.”

Longer footage of the incident showed a different impression and that the teenagers may not have been acting as an unruly mob. Black Hebrew Israelites were screaming epithets and slurs.

“A bunch of babies made out of incest,” one man said. “You worship blasphemy.”

Philips said he placed himself between the Israelites and the teenagers; to serve as the place between a rock and a hard place.

“They were in the process of attacking these four black individuals,” Phillips told the Detroit Free Press. “I was there and I was witnessing all of this … As this kept on going on and escalating, it just got to a point where you do something or you walk away, you know? You see something that is wrong and you’re faced with that choice of right or wrong.”

President Donald Trump took to Twitter to offer praise for the teenagers.

However, new footage has pushed back against the new narrative that the teenagers were innocent bystanders who were looking to avoid conflict. In one clip, one of the boys can be heard laughing and declaring that “It’s not rape if you enjoy it!” Another shows the boys intimidating the elder.

A Catholic diocese outside Cincinnati previously said they were investigating the actions of some of its high school students and condemned the initial videos. There has been no further comments on the latest clips and nor of Sandmann hiring a Louisville PR firm to handle the crisis.

Phillips has offered to meet with the students. He wanted this to be a teachable moment for not only the teenagers involved but the nation.

“I have read the statement from Nick Sandmann, the student who stared at me for a long time. He did not apologize, and I believe there are intentional falsehoods in his testimony,” Phillips said. “But I have faith that human beings can use a moment like this to find a way to gain understanding from one another.”

The school was closed on Tuesday to ensure the safety of its students according to an official. Covington has received numerous threats since the incident.