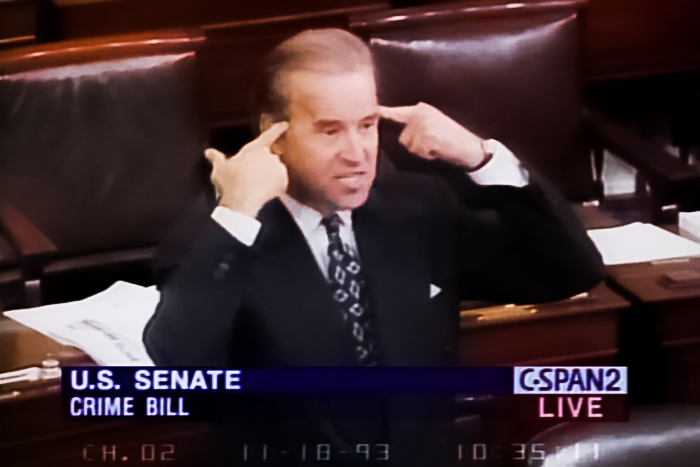 If You’re Black And Thinking About Voting for Joe Biden, Think Again

Shantel NubiaMarch 10, 2020
FeaturedPolitics & Society0 Comments 7
When will the African American community stop getting played by politicians who act like wolves in sheep’s clothing?
Ever since we attained the right to vote in 1870, the community has been used as political pawns to be sacrificed and thrown away. Politicians have a history of promising false narratives to the black community, so they gain the black vote.

The 40 acres and a mule promised to newly freed Africans by General William Sherman and President Abraham Lincoln were snatched away by another politician, President Andrew Johnson.

In 1994, we welcomed President Bill Clinton with open arms. After he threw on some shades and played the saxophone at The Apollo, we donned him our “first black president” and couldn’t wait for him to help end the staggering unemployment in the black community.

We didn’t realize we got played until it was too late. Clinton passed The 1994 Violent Crime Control and Law Enforcement Act, a crime bill , which racially profiled and decimated the black community.

It seems that former vice president Joe Biden is also trying to swindle black voters once again.  Should African Americans vote for Biden just because he seems like a nice guy and was the vice president under President Obama from 2009-2017?

Well in regards to criminal justice reform, Biden’s website says he has a plan.

However, when you dig deeper into his actions, you discover Biden helped incarcerate millions black Americans in the ’90s. In one snippet of a video shared by The New York Times, Biden reveals his prejudices as a Delaware senator.

In this speech Biden showed his racist rear end. When he spoke to the U.S. Senate, Biden described why African Americans are inherently predators and sociopaths incapable of rehabilitating into American society.

Fast forward to 2020 and Joe Biden’s political views have magically changed like a chameleon. It appears Joe Biden changes his political complexion  to satisfy  his constituents in the Democratic Party, no matter the cause and at the right cost.

“When Clinton left office in 2001, the United States had the highest rate of incarceration in the world. Human Rights Watch reported that in seven states, African Americans constituted 80 to 90 percent of all drug offenders sent to prison, even though they were no more likely than whites to use or sell illegal drugs,” Alexander writes. “Prison admissions for drug offenses reached a level in 2000 for African Americans more than 26 times the level in 1983.”

If you’re considering voting for Biden, think twice and do your research.  The agendas he supported in the past hold more weight then the lofty promises and fake smiles he gives to the African American community.

Don’t be misled by statements like him having “Michelle Obama as a running mate,” as your basis for voting for the man. Does he have a plan for the African American community or is this just another swindle for the black vote?

Hey, Joe Biden, the African American Community is not as Naive as you may think. We’ve got our eyes on you.

If You Enjoyed This Article.

Take 30-seconds to complete our survey. We want to know how the community feels about this!