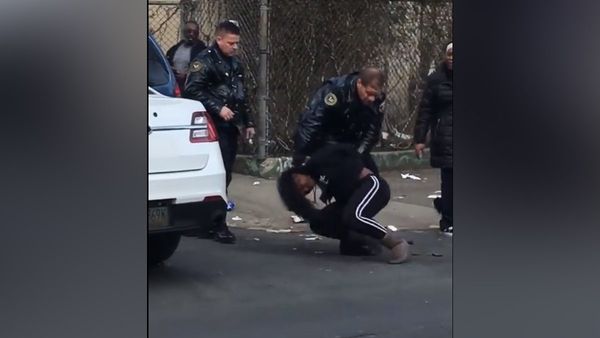 An officer in Philadelphia was caught on camera pulling on the hair of 18-year-old Na-sha Lockett and dragging her to the ground in an incident that is now being investigated.

The encounter, which occurred Wednesday, began when cops allegedly started banging on the windows of a car Lockett was riding with a friend Khalil Harvin. Harvin previously reported the car stolen.  NBC10 reported that footage uploaded to Facebook showed the officer, who is white, standing behind Lockett, who is Black, and pressing her body against the cruiser. He manhandled her even as she demanded to be let go.

The encounter escalated when the officer refused to let go of his hold and Lockett in turn threatened to spit on him. That is when the officer tackled her to the ground by sweeping her by the leg. The Philadelphia Police Department and the Fraternal Order of Police Lodge 5 said the matter would be investigated but cautioned against a rush to judgment.

“We won’t second-guess officers out in the street doing a difficult job. We’ll have more to say when the investigation is complete,” John McNesby, the union’s president, said.

Lockett was jailed for the night and charged with disorderly conduct. That charge has since been dismissed but Lockett felt the use of force was not warranted. Lockett also said she informed them of her asthma and began crying.

Lockett apologized for threatening to spit on the officer but still felt the cop’s aggressive response was overboard.

“You dragged me to the ground. You slammed me, pulled my hair. You did too much,” she said.

Watch footage of the arrest here.