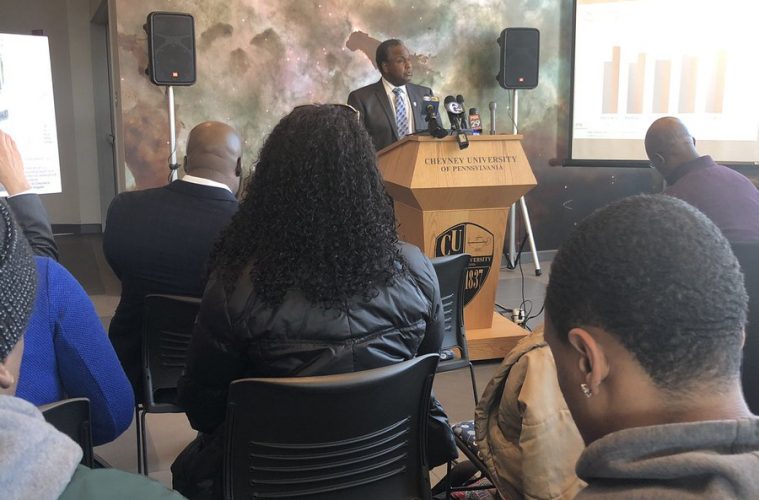 Cheyney University of Pennsylvania, the nation’s first historically black university, is launching a fundraiser and vow to end the year with a balanced budget.

Cheyney president Aaron A. Walton held a press conference in the school’s science center and addressed a gathering that included alumni and students. Walton said that he was eager to have a balanced budget for the school, the first in six years. It was a vow underscored by reports that Cheney is struggling with debt, enrollment declines and accreditation.

“We will have a balanced budget,” Walton said.

The campaign will be called Resurgence.

Walton also said that enrollment at the school which is currently 400 plus was expected to grow to over 700 next year. Walton, who became president of the university in 2017, said the university was in talks about building a hotel and conference center on campus. Furthermore, there was a partnership with the national Starbucks Foundation for research.

“All these would be revenue-generating activities,” Walton said.

Walton told The Philadelphia Tribune’s editorial board that he was determined to keep the historic college open despite the current hardship.

“Cheyney is going to stay open, the issue is accreditation. If you don’t get accredited, you’re no longer eligible for Title IV funds, nor are you eligible for Pell Grants, etc., and we would default on one of the conditions of staying accredited,” he said about federal grants, student loans and other funding.

“There are still challenges,” he said. “It isn’t just the immediacy of financial needs. It’s the sustainability of the institution and our ability to provide an academic environment that embraces the issues that Middle States has some concern about.”

Daniel Greenstein, chancellor of the Pennsylvania State System of Higher Education, announced last month that Cheyney could lose its accreditation and the school would be short $10 million. After the conference, the state reiterated its support for the university.

“We’re going to continue to work with Cheyney and support them,” Kenn Marshall, a spokesperson for the state system, said.

“Obviously, President Walton has a plan and we hope it’s successful.”