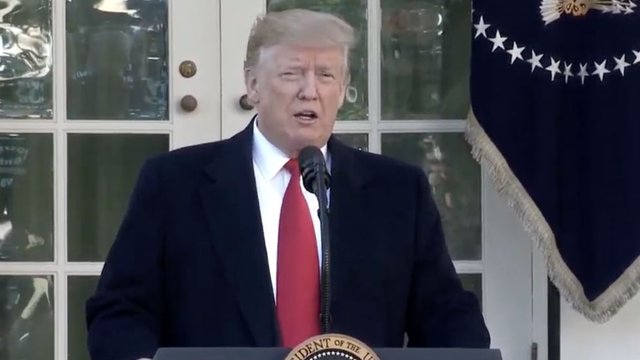 President Donald Trump announced Friday he will support a short-term funding bill to reopen the government until Feb. 18. The bill does not include funds to construct a wall along the southern border.

“I am very proud to announce today that we have reached a deal to end the shutdown and re-open the federal government,” Trump said.

Trump made the statements in a ceremony at the Rose Garden. He declined to invoke a national emergency proclamation. Sources have said Trump had it drafted it for potentially billions of federal toward wall construction. However, doing so would have led to immediate lawsuits by Democrats.

“As everyone knows I have a very powerful alternative but I’m not going to use it at this time,” Trump said.

Trump continued to defend the need for a wall during his remarks. He also pledged that Republicans and Democrats would work together to find a long term solution to immigration and security. He insisted that walls were not controversial but would use executive action if his concerns were not addressed.

The measure to reopen the government for the next three weeks after the month long shutdown will allow workers to be paid. Federal workers missed two paychecks since the partial shutdown began Dec. 22, 2018. On Friday, the FAA delayed flights at major airports due to staffing issues as many TSA workers called out.