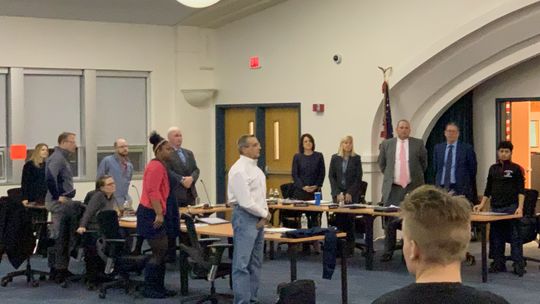 Officials at Eastern Middle School, located in Binghamton, N.Y, have been accused of making four Black girls endure a strip search on Tuesday, January 15th. The 12 year-olds had been deemed too “hyper” and “giddy” by Principal Tim Simonds after lunch. Simonds ordered the school nurse and Assistant Principal Michelle Raleigh to question and then strip search the girls without the consent of their parents.

Progressive Leaders of Tomorrow, a local advocacy group, demanded accountability on Facebook. They said the girls were violated, humiliated and traumatized by the experience. Furthermore, the girls were subjected to “disparaging” comments from the nurse about “the eczema of one girl and the size of another’s breasts.

The Binghamton City School District denied any wrongdoing. An official maintained that proper procedure was followed.

“Unfortunately, our students shared that these actions have had the unintended consequences of making the students feel traumatized. We sincerely apologize for the impact this has had and are working with these families to support their children’s success,” according to the district’s statement. “A student may, under current law and policy, be searched in a school building by an administrator when the administrator reasonably suspects that a student’s health is in danger or is in possession of a substance that may harm themselves or others,” read the statement.

Administrators also promised to review guidelines. However, members of the community remained outraged that the school even took this drastic measure and nothing has been done. They attended the Binghamton school board Tuesday to address their concerns. Some parents had not been aware the strip search was conducted and others said their calls were ignored. Others noted that being excited was not a sign of drug use and the allegation was only made because they were Black.

Sulaiminah Burns, an attendee, was appalled that the search fell on the observance of the Martin Luther King Jr. holiday.

“That’s the day you chose to strip-search four little girls. You should be ashamed of yourselves. Ashamed. Four little black girls. Shame on you. I have children in your school district. I’m not going to sugar coat it, if that happened to my children, this meeting would be very different,” Burn said.

Broome-Tioga NAACP President Mica Barreiro told the Binghamton school board what measures they wanted taken to address the situation. Barreiro wanted the removal of the principal, assistant principal and nurse. Stopping the practice of strip-searching children, alternative instruction and an apology to the girls were some of the demands as well.

Watch footage from the school board meeting below.