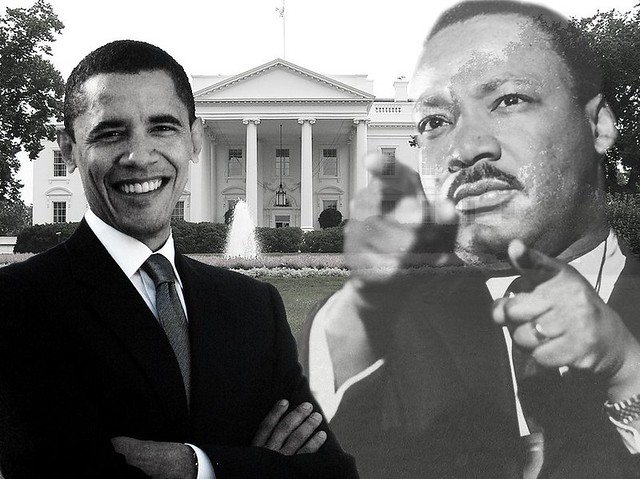 Barack Obama was the first African American president of the United States. Born on August 4, 1961, Barack grew up in Hawaii and Indonesia to his White mother from Kansas, Stanley Ann Dunham, and Black father, Barack Obama, Sr., who was born in Kenya, Africa. His parents divorced and his mother married a man from Indonesia. It was during his childhood that Barack would be raised by his grandparents in Hawaii and went by the nickname “Barry”.

In 1983, Barack had graduated from Columbia University, and he held several jobs thereafter including working at the Developing Communities Project in Chicago. Eventually he decided to become a lawyer and entered Harvard Law School. He graduated in 1991 ready to start practicing law.

In 1996, Barack entered politics and ran for the Illinois State Senate and won. He served on the state senate until 2004 when he was elected to the United States Senate.

Just serving three years as a Senator Obama competed in the 2008 presidential election. He had gained national recognition for being an excellent speaker and being culturally diverse for a mixed-race man who grew up around different people in different situations.

His biggest hurdle would be defeating former First Lady and New York Senator Hillary Clinton in the democratic primaries.

Obama defeated Hillary Clinton, former First Lady and New York Senator in the primaries and then defeated Republican candidate and war veteran John McCain in the general election. He was inaugurated as president on January 20, 2009. He was re-elected again in 2012, winning the election after defeating Republican Mitt Romney.

Obama had numerous accomplishments and notable moments, but his most crowning achievement is how he inspired so many Black movements, including the ones that ideologically agree with him.

Michelle Obama is a Chicago native with family ties rooted in slavery. Her family, the Robinson and Shield families, were survivors of the Civil War. Her paternal great-great grandfather from South Carolina, Jim Robinson, was born into slavery and wasn’t a freedman until he was 15. Michelle’s father, Fraser Robinson III, was a Chicago water plant employee and Democratic precinct captain. Her mother Marian Shields Robinson was a secretary at Spiegel’s catalog store, but eventually became a full-time homemaker until Michelle went to high school.

Michelle would later attend Princeton University for a Bachelors in sociology in 1985 and Harvard University for her law degree in 1988, three years before her would-be husband.

Barack Obama met Michelle in 1989, when she was his mentor during a summer program at a Chicago law firm. Michelle recalls having a bad first impression of Barack because he would be late their initial workplace meeting. Despite Michelle’s initial opposition to dating Barack, thinking it was ill-advised to date a man like him, she gave him a chance.

In addition to Barack’s speaking skills, one of his defining characteristics in becoming president was the support from his wife.

Michelle added appeal to the Obama campaigns in 2008 and 2012. As a mother of two and supporter of her husband who would eventually escalate from State Senator to presidential candidate, it was easy to realize Michelle as a strong Black woman. America took interest in the Obamas over the much shill candidates like Hillary Clinton or Mitt Rodney.

Martin Luther King, Jr. was a civil rights activist between the 1950s and 1960s. His message of empowerment and religious teachings led non-violent protests to fight for the rights of all people including African Americans.

Born in Atlanta, GA on January 15, 1929 as Michael King Jr. he went to Booker T. Washington High School. He was very smart. He skipped two grades in high school and started his college education at Morehouse College at 15.

After getting his degree in sociology from Morehouse, Martin got a divinity degree from Crozer Seminary and eventually his doctor’s degree in theology from Boston University.

In 1953, he married Coretta Scott. Later, they would have four children including Yolanda, Martin, Dexter, and Bernice.

Martin was assassinated on April 4, 1968 in Memphis. He was standing on the balcony of his hotel, and he was shot by James Earl Ray. Despite the killer’s intent, Martin’s death helped America to rethink about the impact of person’s civil rights.

Born on May 19, 1925 in Omaha, Nebraska, Malcolm Little, but known as Malcolm X, grew up in a Great Depression Era. His father left him and raise seven siblings to single mother. Malcolm’s mother wasn’t able to provide him and his siblings food. Malcolm was sent to a foster family at 13.

By age 15, he had dropped out of high school and decided to live in Boston.

With less than a diploma. Malcolm turned to a life of crime. In 1945, he was found guilty of stealing and was sent to prison. However, prison changed Malcolm’s life for the better. He had find a new religion and joined the Nation of Islam. The Nation of Islam believed that black people were superior to white people and that white people were evil. It also said that Islam was the true religion of black people. That was when Malcolm decided to change his last name to an X.

Malcolm’s radical approach to civil rights led to conversations about the establishing of a separate black community rather than integration and the use of violence in self-defense rather than a peace protest.

Malcolm would eventually have a change of heart in his civil rights career in the mid-1960s and leave the Nation of Islam. February 15, 1965, Malcolm was gunned down by three members of the Nation of Islam during one of his speeches in Harlem.

Regardless of popular opinions, Malcolm is still a modern inspiration for Black rebellion.