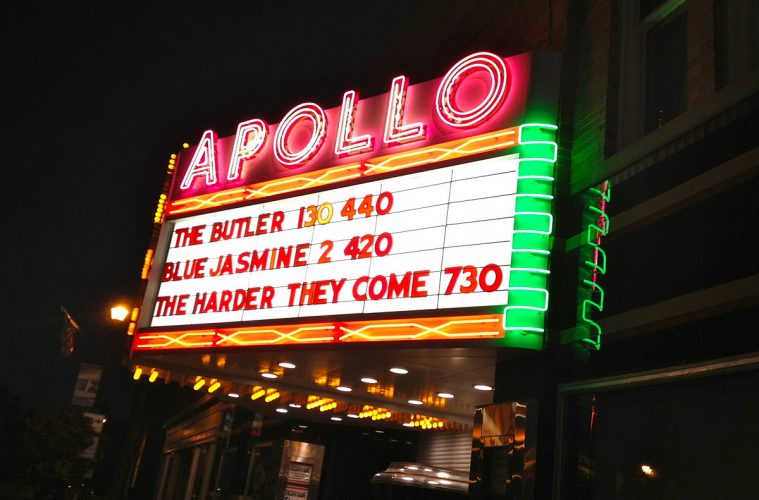 With the summer coming to an end soon, here are some African American historical sites that you can visit around New York City.

This is one of the African American historical sites Located on West 125th Street between Adam Clayton Powell Jr. Boulevard and Frederick Douglass Boulevard, the Apollo Theater was opened in 1934 by Sidney Cohen as a music hall showcasing African American talent. Over the years, various musicians like Ella Fitzgerald and Jimi Hendrix have performed there.

Beginning every Wednesday at 7:30 p.m., The Apollo hosts its famous “Amateur Nights.” One notable upcoming event on August 15. It is a part of Harlem Week called  “Uptown Apollo Hall:  Harlem’s Culture – Past. Present. Future.” It’s a conversation between leaders of Harlem’s top art organizations. Other events include “Ta-Nehisi Coates In Conversation: The Water Dancer,” his new book is out September 23.

On the list of the African American historical sites is Sylvia Woods opened this restaurant in 1962 on Malcolm X Boulevard between West 126th and 127th. After moving to New York with her husband from South Carolina, she brought this property from her former boss and for the 55 years, it stood in the neighborhood. Woods died in 2012, but the restaurant is still run and owned by her family. With staples like chicken and waffles and shrimp and grits, this restaurant gives everyone who comes an authentic taste of soul food. Every week on Sundays they offer Gospel brunch, which often showcases live music and daily specials. Live music is played on Wednesdays as well.

The Schomburg Center for Research in Black Culture is a research library branch of the New York Public Library. Located on Malcolm X Boulevard between West 135th and 136th streets, the branch contains a collection of over 10 million Afrocentric artifacts, including unpublished manuscripts of Langston Hughes and a rare recording of a speech given by Marcus Garvey. The Schomburg Center was named after Arturo Alfonso Schomburg. Schomburg donated his collection of Black literature to the branch in 1926. Now it has five divisions: Art and Artifacts, Research and Reference, Manuscripts, Archives and Rare Books, Moving Image and Recorded Sound, and Photographs and Prints. It also hosts events, such as “First Fridays: House Music Editions Honoring Larry Levan” on August 2 which will celebrate Larry Levan’s music.

Opened this summer on an unnamed road along the Belt Parkway in Brooklyn on the edge of Jamaica Bay, this 407-acre park is dedicated to the first Black woman elected to the United States Congress, Shirley Chisholm. Chisholm was born in Brooklyn on November 30, 1924 and was elected to Congress in 1968. She represented New York’s 12th Congressional district for seven terms. Chisholm also went on to run for president in 1972, making her the first woman, let alone Black woman, to run for president. According to an article Governor Andrew Cuomo released on his website, this is the largest park in the city. While there are no events yet, visitors can rent bikes for free from Bike New York who need comma partnered with the city to create Shirley Chisholm State Park Bike Library and in the future, there will be programs for children by environmental organizations like Audubon New York.

This center was opened on May 19, 2005, the 80th anniversary of Malcolm X’s birth. It’s located on West 165th Street and Broadway, in the building where the Audubon Ballroom was, the place where Malcolm X was assassinated in 1965. The center was created as a place to honor Malcolm X and his wife, Dr. Betty Shabazz, and continue educating people about social justice issues. At the center, there are multiple interactive kiosks and documents that visitors can use to learn more about Malcolm X and Betty Shabazz’s lives.

This church, also known as “Mother Zion comma is the oldest Black church in New York State. Founded in 1796 on West 137th between Adam Clayton Powell Jr. Boulevard and Lenox Avenue in Harlem, founded by abolitionists like Harriet Tubman and Sojourner Truth, and the legacy continued during the Harlem Renaissance with members like W. E. B. DuBois and Langston Hughes.

This field was opened in Brooklyn in 1913 and was home to Brooklyn Dodgers team until 1957 and three National Football Teams in the 1920s. The first game played here was an inter-league game against the New York Yankees on April 5, 1913. The Brooklyn Dodgers were the first team to sign a Black player to their team when they signed Jackie Robinson on April 15, 1947. This field had to be demolished after a slew of wins and because there was no way to expand the field in Brooklyn, the Brooklyn Dodgers moved to Los Angeles and became the Los Angeles Dodgers. While this area is no longer the actual field, the apartments are still named Ebbets Field Apartments.

Sandy Ground is located within the community of Rossville, Staten Island. Sandy Ground was founded by Captain John Jackson for free African-Americans prior to the Civil War, making it one of the oldest surviving communities in the United States. In fact, it was brough almost immediately after the abolition of slavery in New York. Originally it was named Harrisville, then it was changed to Little Africa. There are still standing historical structures in this community.  There are five that have been designated as New York City landmarks: a church, a cemetery and three homes, where ten families live that are direct descendants from the original settlers, according to the visit Staten Island website.There is also a museum, the Sandy Ground Historical Museum, which is dedicated to the community and has the largest documentary collection of Staten Island’s African-American culture and history.

The Weeksville Heritage Center is located in the neighborhood of Crown Heights, Brooklyn. Weeksville was one of the first free Black communities in the 19th century and one of the few pre-Civil War Black communities that still exists. Weeksville was named after James Weeks, who bought land in 1838 in order to provide space for a Black community to flourish. Visitors can tour the Hunterfly Road Historic District, which consists of four historic homes, or look through multiple exhibits. Current exhibits include “From Africa to Weeksville: Eric Edwards Collection”, which showcases over 50 pieces of art from 17 African countries.

Ailey worked to combine different types of dance with the Black vernacular in order to spread awareness of the Black experience in America. The theater has gone on to perform around the country and around the world, and they are currently touring in London and Copenhagen. They also offer various dance classes ranging from ballet to West African.