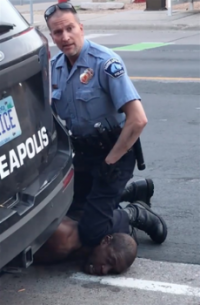 The Execution of George Floyd: The dilemma of African Manhood

I am an African man born in the diaspora as far back as my consciousness can go my life has been a struggle. I first knew that I was black when walking hand in hand with my Mother in the supermarket a young white boy shouted out, he is black. Since everyone in my household was black it had never occurred to me. But somehow my five-year-old mind managed to pick up the energy of disgust in that little boy’s voice. My Mother never addressed it and neither did I. Looking back it was a milestone in my consciousness, and that moment has resonated throughout my life like silent fireworks. The fact that I was objectified and selected for ridicule made it an unconsciously vulnerable moment and in truth, as Du Bois would say, my person has always felt a sense of vulnerability even in my most testosterone-fueled moments. While one can suppress this sense of personal vulnerability, the collective sense of fear underpins the very existence of the African man even in Africa. The irony of the African man is encapsulated in the powerful sinews and magnificent specimen that typifies the predominant image of the Black Man. That behind this solid wall of muscle and cool demeanor is a palpable sadness. Yes, African men are envied for their athleticism and splendid body mechanics and even feared, but we are despite the projection of noble manhood seen as implacable victims.

Let me leave the history for a second yes, we are the fathers of history! Yes, we are Malcolm, Khallid and Hannibal, but in the consciousness of our own minds and the minds of other so-called human beings, we are Niggers. Why use such crass language? I was meditating and realized that for all of the deeply philosophical, sensitive and powerful conversations I have, African men do not mention or discuss George Floyd. It is likely that myself and Mr. Floyd may have had little in common we may not have even liked each other but his execution speaks silent volumes into my consciousness. The powerfully built George Floyd was reduced to a young child calling for this Black Mother who carried this Black child in her womb for nine months. Who knows what possibilities his Mother imagined for her baby boy.

The point is not to criticize George Floyd rather it points to the dilemma of being an African man in the Western hemisphere that size, occupation, intellect, wealth or poverty provide no protection. If properly understood in collective terms white males fear African men and the history of the last four hundred years attests to that fear that manifests as impotent and potent power.

Particular white men have erected a system of racial supremacy designed to arrest the development of African men. And black men have resisted and been victorious, indeed maybe black men are seen as the white men’s ultimate nemesis.

Whether you blame it on the power structure or blame it on the white ruling class, the black man and white man have a special relationship that most black or white women do not fully understand.

It is imperative that we identify the murder of George Floyd as a visual execution. It was a 21st-century lynching masquerading as an arrest!

George Floyd was publicly lynched. That officer was playing out an old white ritual that highlights the power differential between them and us and the message was made clear to the collective audience! The black man is vulnerable, expendable and a lamb to the slaughter. This ritual has been played out on plantations, streets, prisons and dungeons throughout the diaspora.

This ritual was performed on Toussaint Louverture as he was taken and starved to death, this modified ritual was performed on Marcus Garvey, Malcolm and Patrice Lumumba through the use and manipulation of black people. It matters not, that we have avoided, negated and disrupted the shenanigans of people dedicated to our demise. The core memory is of failure, humiliation, defeat and sorrow.

The essence of the situation is demonstrated in the African man’s discussion’s that we refer to our oppressors as they. No one clearly defines who they are? Because they exist in the tortured part of our wounded psyches! We were taught by our peers and our Mothers and Fathers that they will punish us. Malcolm and the Messenger knew who they were and told us. But even if they do not exist, they exist for us as real and imagined fears. It is also true most black women do not understand the pain hidden behind granite faces and desensitized male expressions.

George Floyd reflects the African man’s fear of himself regarding his violent fantasies and his cautious restraint designed to protect his sometimes-fragile projection of manhood. If one has to loudly proclaim one’s manhood it is because his manhood is questioned. We are men with a unique perspective on manhood and post enslavement survival tactics within a warzone where race is a significant factor.

The response to the execution harkens back to schoolyard banter where boys talk of what they would have done had they been there. The same way we do with Malcolm and the countless others like Fred Hampton and Huey P. Newton. If white men fear black revolutionaries, we fear them more! George Floyd was no revolutionary or activist perhaps because so many of our leaders have been undermined or assassinated. undermined killed, worn down and succumbed to drugs or suicide.

So, some say African men are passive, yet this is a lie too, as every weekend and weeknight from Jamaica, New York and London, Brazil and cosmopolitan cities black boys and men engage in self-inflicted brutal orgies of violence against targets deemed as acceptable, yes, we know other ethnic groups do it we have the statistics but how many George Floyds were felled at the hands of men and boys with similar stories and similar Mothers. No, I am not a coon or apologist I am searching for answers as to why does it hurt black people so much when white men kill us? Death is death.

There is something in the black psyche that yearns for white acceptance. So, we turn to religion for solace and answers, or pragmatism often frightened that our answers are safety gauges. So, we are not passive nor are we truly ignorant we too collaborate with the system and our traumatized consciousness. There are no easy or comfortable answers we cry for peace in the midst of a century’s old racial warfare.

So, African men avoid talking about George Floyd we pretend that it was not execution or a public display of social and cultural rape. We repress and dampen our fears through medication, drugs, cultural and physical suicide. Years ago, nine of us were killed in a Church we pledged forgiveness before the blood had dried on their corpses.

Our people cried for George Floyd because he was a symbol of black masculinity taken prematurely face down crying for his Mother with his last breath. How many ways to kill a black man in the Western hemisphere by jury, poverty, medication and sorrow.

Yet, black men do not want to talk about George Floyd due to the residue of raw pain that has accumulated over centuries, George Floyd, Emmett Till, Trayvon Martin and countless others were all executed because they were African,  feared and seen as a threat. Said differently are we afraid to look deep into ourselves and acknowledge our anger and fear or will we continue to ignore the truth of George Floyd.

This essay has no silver lining in it, George Floyd’s murder bore witness to the limited choices offered to black men in the Western hemisphere. Despite the demographic decline of white America white supremacy is still killing black people. And black people are still destroying property just like our forebears did on those plantations as a means of rebellion.