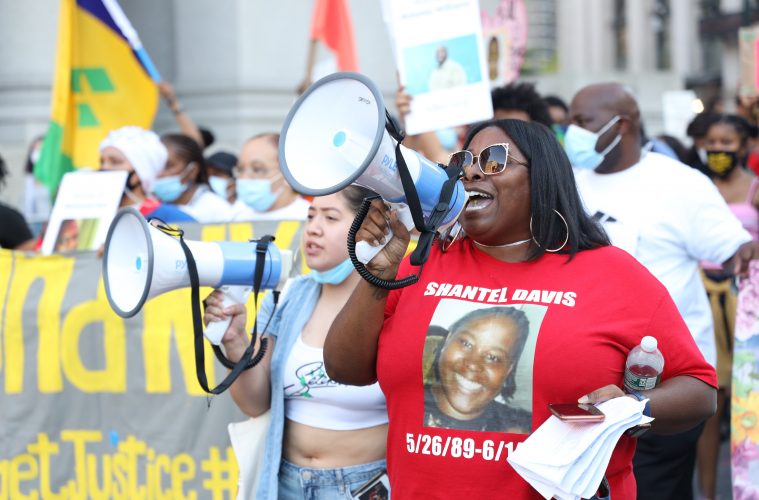 On June 9th Mothers, fathers, sisters and brothers of kin of police violence victims led march thousands through the streets, 50a repeal passes through both houses.

On June 9th, over 20 family members of New Yorkers killed by police between 1973 and 2019 came together at City Hall with thousands of supporters to demand the immediate defunding of the NYPD by at least $1 billion, the repeal of 50a – the “Police Secrecy Law” – and passage of special prosecutor legislation, and dismissals of NYPD officers involved in their loved ones’ deaths and recent misconduct and violence.

Families whose loved ones were murdered by police, along with Justice Committee and @changethenypd fought hard to make sure NY State pass #SaferNYAct bills – #PoliceStatAct, #Repeal50, and #SpecialProsecutor, which will help to increase police transparency & accountability in NY. Thank you families and all those who stand with them! The fight continues – #StandWithTheFamilies "We're fighting in the name of the ones we've lost. And we're following the families who know the cost." — song by @thepeacepoets

The families expressed their collective outrage with decades of police violence and other forms of systemic racism, the ongoing lack of accountability for the officers who have killed their loved ones and brutalized New Yorkers, and New York City’s over-investment in policing and under-investment in Black and Brown communities under Mayor Bill de Blasio. They called for the defunding of the NYPD by at least $1billion by July 1.

“Let’s defund the police and have that money reallocated to our communities that are crying out for help,” said Angie Hicks, aunt of Shantel Davis. “That includes our schools that are raising the next generations. You cannot take away money from where it’s needed and not expect a reaction from the people. We certainly don’t need more police on the street with added armor increasing police brutality.”

“We know how hard communities of color have been impacted by covid-19 and on top of that we have been criminalized and brutalized during the pandemic,” said Kadiatou Diallo, mother of Amadou Diallo. “We need to fight hard to reallocate the NYPD’s budget. We do not need more cops. We need to hold cops accountable and think of the services we can provide that are in the best interest for our communities, like afterschool programs and homeless services. We need the removal of police as first responders to those in emotional distress.”

Photos from today's Latinx/Afro- Latinx/Black solidarity march against #NYPD and ICE (which replaced the #PuertoRicanDayParade w/ an action). Images include: 1. Parents of #AntonioWilliams speaking at #Harlem state building. 2. JC members outside the People's Church in #ElBarrio 3. Brother of #RamarleyGraham leading chants. 4. JC members inside the People's Church. 5. Mother of #MohamedBah leading chants. 6. JC members w/ former Panthers and a Black Panther Collective member. (If @mxgmnational had been there it woulda been our full #CopWatch lineage.) #BlackLivesMatter #DefundNYPD #QueVivaBorikènLibre

“We pay the NYPD so much money and they constantly kill our people,” said Hawa Bah, mother of Mohamed Bah. “They killed my son, Mohamed, in front of me and neighbors while we were begging for them to let us talk to Mohamed. I demand that Mayor De Blasio remove $1billion from the NYPD’s budget so that those funds can be used to protect and serve our communities and the next generation.”

The families – who have been at the forefront of the fight for state-level police transparency and accountability legislation – also celebrated the passage of the Police Stat Act on Monday. As they led the blocks-long protest up Broadway, the repeal 50a, passed through the Assembly, after passing through the Senate earlier in the day. If signed into law by the Governor, the repeal will make police misconduct records available to families of victims and the public.

Carol Gray, mother of Kimani Gray, made the announcement to the crowd and led protesters in chanting, “Victory!” 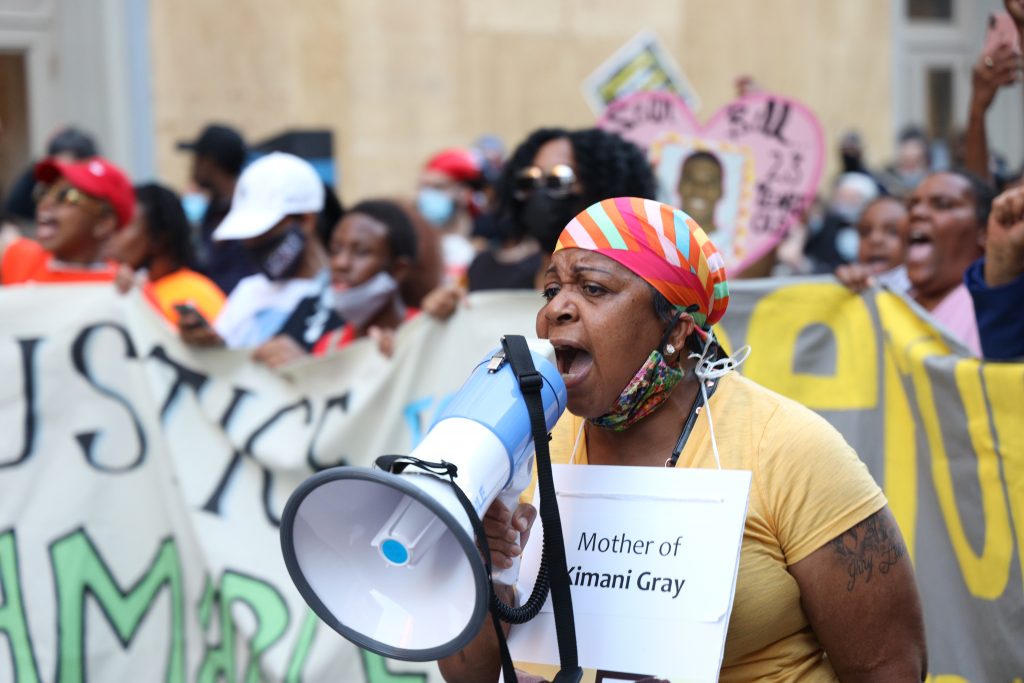 “We are tearing down the wall of secrecy that has been shielding officers across the state,” said Constance Malcolm, mother of Ramarley Graham. “The Senate and the Assembly both voted to repeal 50a today. Yesterday, they both passed the Police Stat Act – which will require public reporting on police killings and low-level enforcement. That’s because we have been rising up. These are movement victories and we’re not going to stop! We have to make sure our special prosecutor bill is passed next and Governor Cuomo signs all three bills into law.”

“Governor Cuomo needs to know: if he doesn’t sign these bills into law, the families are coming for him,” said Valerie Bell, mother of Sean Bell.

The families also called for the immediate firing of NYPD Officer Wayne Isaacs, who killed unarmed Delrawn Small in 2016, as well as all the officers who killed their loved ones and those who have recently abused New Yorkers during protests and social distancing enforcement.

“De Blasio and Shea must fire Wayne Isaacs immediately, as well as all officers involved in Eric Garner’s murder and all officers who murdered our loved ones,” said Victoria Davis, sister of Delrawn Small. “It is a threat to public safety and a gross misuse of taxpayers’ dollars to keep these officers on the force year after year. On top of this, we are calling for all of the officers who you’ve seen in the videos – driving into protesters, pushing people to the ground, beating people and calling it social distancing enforcement – to be fired immediately. They do not deserve one more cent of city money.”

The families and supporters applauded the people and communities across the nation who are rising up and winning change include the arrest and charging of all the officers who murdered George Floyd; the millions of dollars that were cut from the LAPD police budget; talks in Minneapolis to dismantle their police force; and in New York, the passage of the Police Stat Act and 50a repeal. 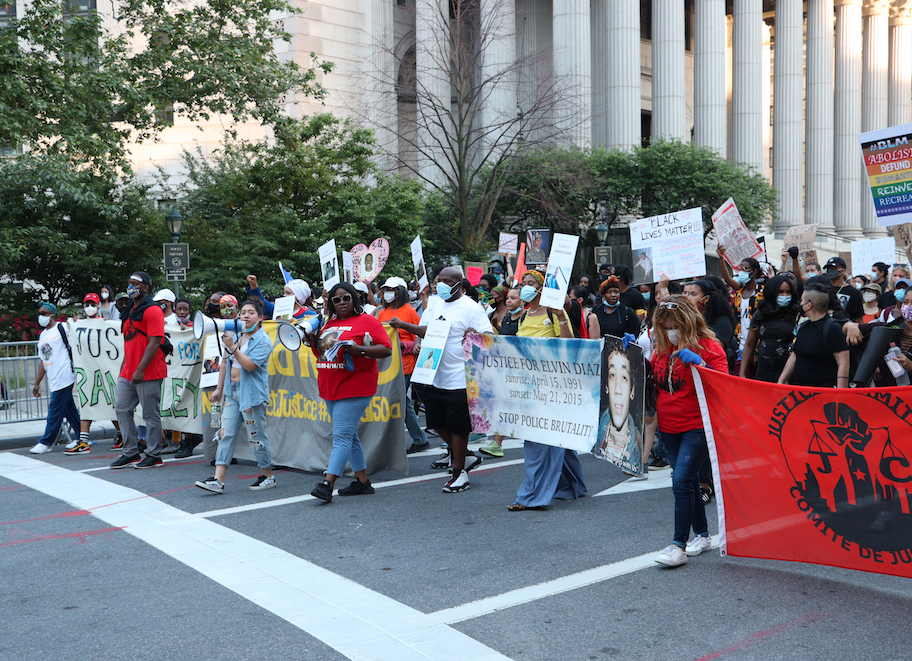 “Thank you all for being in the streets and rising up with us,” said Natasha Duncan, sister of Shantel Davis. “What we’re proving right now is that resistance works. Uprising works. We’ve endured years of abuse, state violence, and not being heard. But now, we are turning the tables on them. We are forcing those with wealth and power to listen to us and concede to our demands.”

“These families have endured the worst possible consequence of police violence and they therefore know better than anyone what change is needed,” said Loyda Colon, Co-Director of the Justice Committee, the grassroots organization of which most of the families are members. “When they stand unified, our movement stands with them, and we rise up together, our collective power is undeniable and unstoppable. That’s why we are starting to see elected officials concede to the families’ and the peoples’ demands.”

“The NYPD needs to be defunded and that money should be used to provide services and financial support in ways that do not criminalize or police people,” said Constance Malcolm, mother of Ramarley Graham. “Ramarley’s brother, Chinnor Campbell, who watched him be murdered at six-years-old, is now in high school and there are police in his school. The school officers are essentially preparing students to be criminalized. We need more social workers, teachers, and guidance counselors in schools – not police. Mayor De Blasio and Commissioner Shea must go because we need people in office that will stand up for us, not just the police.”

“We need to defund the NYPD because they’re taking from those in need,” said Iris Baez, mother of Anthony Baez. “The NYPD’s budget is bloated. The mayor needs to spend more money on education, homeless programs, and services for community members. Nothing has been done for the communities that Mayor De Blasio is supposed to be protecting, outside of policing them.”

“It is unconscionable that individuals who we voted into the City Council and entrusted to negotiate the city’s budget with the Mayor, would consider approving such a gross imbalance of city funds,” said Kisha Walker, god sister of Sean Bell. “This would leave our children and communities at a disadvantage, while oversupplying the NYPD by billions. If passed, this budget will be a deep betrayal.”

“We need to defund the NYPD and put the funds into areas that are needed in our communities, like housing, school programs and services for the homeless,” said Gladys Williams, step mother of Antonio Williams.

“Defunding the NYPD is important so that money can be moved to help our communities and be put towards our schools to employ more staff, like teachers,” said Eric Vassell, father of Saheed Vassell.

Families who planned and/or participated in the action include:

Valerie Bell, mother of Sean Bell, killed by NYPD in 2006

Natasha Duncan and Angie Hicks, sister and aunt of Shantel Davis, killed by NYPD in 2012

Gwen Carr, mother of Eric Garner, killed by NYPD in 2014

Victoria Davis, sister of Delrawn Small, killed by NYPD in 2016

Kadiatou Diallo, mother of Amadou Diallo, killed by NYPD in 1999

Hawa Bah, mother of Mohamed Bah, killed by NYPD in 2012

Hertencia Petersen, aunt of Akai Gurley, killed by NYPD in 2014

Carol Gray, mother of Kimani Gray, killed by NYPD in 2013

Nancy Pacheco and Shana Munoz, sister-in-law and cousin of Jayson Tirado, killed by NYPD in 2007

Iris Baez, mother of Anthony Baez, killed by NYPD on 1994

Shawn, Gladys and Justin Williams, parents and brother of Antonio Williams, killed by NYPD in 2019

Eric and Lorna Vassell, parents of Saheed Vassell, killed by NYPD in 2018

Jennifer Gonzalez-Dioud, mother of the son of Kenny Lazo, killed by Suffolk County Police in 2008

Ellen Trawick, mother of Kawaski Trawick, killed by NYPD in 2019

Gloria Torres, mother of Kadeem Torres, killed by NYPD in 2017

Darlene Armstead, sister of Clifford Glover, killed by NYPD in 1973

Samy Feliz, brother of Alan Feliz, killed by NYPD in 2019

Moses Pinero, uncle of Noel Polanco, killed by NYPD in 2012

This article “Fams of NYers Killed by Police Lead Action to Defund NYPD, End Police Secrecy, Demand Accountability“was originally published on The Justice Committee’s website as a Press Release on June 11, 2020.  This article has been intergrated with video, audio, and social media images. Please, read the original article HERE