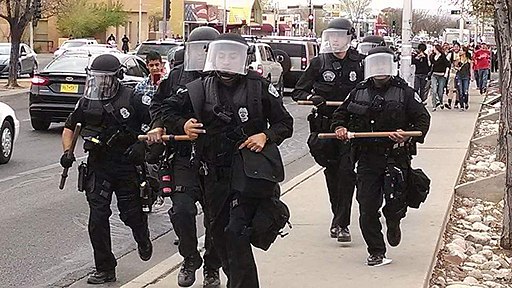 How The Media Uses Language to Normalize Police Killings

On August 23rd, 2020, Kenosha News published an article with the headline “Man in serious condition after Kenosha Police officer-involved shooting.” That man was Jacob Blake, a 29-year-old Black man who was shot four times in the back during an arrest, while three of his sons were in the backseat. Readers wouldn’t know this though, as the writers left out this crucial information and opted for the vague “police officer-involved shooting” instead.

“Officer-involved shooting” is a common phrase tossed in headlines when media outlets are reporting violent police killings. Headlines such as the Washington Post’s “Looters smash business windows along Chicago’s Magnificent Mile after police-involved shooting” and the New York Daily News’ “Protests erupt in Los Angeles after officer-involved shooting of Black man” is typical for covering these stories, but they are also problematic. The vague nature of the phrase is not only misleading to readers but effectively removes the officers from culpability.

“Officer-involved” could quite literally mean anything. Was the officer shot? Was the officer killed? Was there an officer involved in the altercation? All of these potential questions open up the reader’s mind to alternatives outside of what really happened. A police officer killed someone.
In “An Interactive Guide to Ambiguous Grammar,” a 2015 essay by Vijith Assar, he argues that this phrase is the ultimate “passive voice,” stating that “culpability is impossible when actions no longer exist.” The simple phrase “officer-involved shooting” completely removes the officers from accountability because the phrase implies that there is no action, only involvement. The officers are effectively removed from their violent actions and the subsequent loss of life. Similarly, in an article for HuffPost, Craig Martin notes the dangerous way this ambiguous language can affect
our democracy as a whole, stating “if we do not write clearly about our political system and public institutions, we will cease to think very clearly about them too.”

Breonna Taylor’s ex was offered a plea deal to say she was part of a "crime syndicate," the family’s attorney says.

The attorney says the offer shows that local officials are "desperate" to justify Taylor’s killing. https://t.co/35T8zgDpLm

The role of the media in a democracy is to provide people with information on our political systems and institutions and to identify problems in our society. Information coming from the media is then used to create discourse and is ultimately used by voters to make their decisions when they go to the polls. But what happens when the information provided by the media is ambiguous and misleading? When the media removes officers from accountability through their ambiguous language under the guise of objectivity, do they become complicit in the officer’s actions?
Objectivity is the foundation on which the profession of journalism is built upon and a necessary attribute for all journalists. The Society of Professional Journalism stands on four principles, one of them being “seek the truth and report it.” They further state that it is crucial to “take special care not to misrepresent or oversimplify in promoting, previewing or summarizing a story.” Yet, it can be argued that the phrase “officer-involved shooting” completely misrepresents the facts of police killings.

In an article published by the New York Times on June 23rd, titled,   “A Reckoning Over Objectivity, Led by Black Journalists,” Wesley Lowery refers to the phrase “officer-involved shooting” as a “clunky euphemism,” and states “neutral objectivity trips over itself to find ways to avoid telling the truth.”

Yet, after publishing the riveting opinion article in June, on September 4th,
the Times published a tweet for an article saying “an Antifa supporter suspected in the killing of a right-wing activist in Portland, Oregon, was killed when agents moved to arrest him on Thursday
night.”

Breaking News: An antifa supporter suspected in the killing of a right-wing activist in Portland, Oregon, was killed when agents moved to arrest him on Thursday night, officials said.https://t.co/hnvszh9plr

The use of linguistic acrobatics in an effort to remain objective is unsurprising, but the
following day the Times published an article headlined “Cleveland Officer Is Shot and Killed.”

Media outlets’ ability to state facts clearly in plain language is evident. So, when publications are jumping through hoops to remain objective and avoid saying “a police officer shot and killed someone,” we have to ask the question, at what point does the effort to remain objective become
an effort to skew the facts?

As we continue to examine ways to better improve the systems that serve us, it is crucial that we look at the media as well. While objectivity has long been the pillar of journalism, perhaps it is time to acknowledge that nearly distorting the facts of an event is not the best way to remain objective, nor is the act objective in itself. It is time for the media to understand that using nuanced language while reporting police violence in an effort to be fair to the officer’s results in being unfair to the victims.