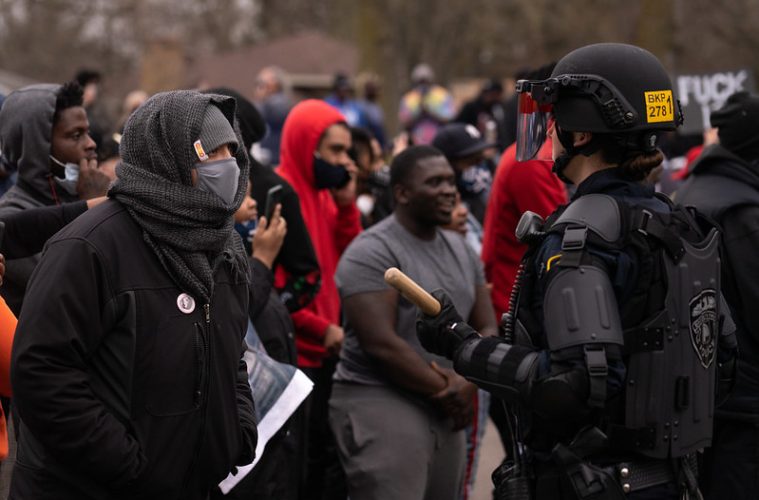 The aftermath of the Killing of Duante Wright

Duante Wright, a 20-year-old Black man shot and killed by police officers in what should have been a routine traffic stop just ten miles from where the Derek Chauvin trial is taking place. Officers pulled Wright over for a traffic violation: driving with expired registration tags. The incident was allowed to spiral out of control by Kim Potter and her fellow officers. Their whole approach seemed designed to escalate matters, turning a minor infraction into a tragedy. The adrenaline-fuelled hyper response exhibited by Potter and so many officers when they have sight of a Black man is criminal.

Modern American policing is a direct result of Americas 400 year campaign of dehumanising Black people, it is in truth closer to slave patrols than many would care to admit. From Tamir Rice to Michael Brown, a trigger happy unprofessional police force is on display. When it comes to policing Black communities it is less protect and serve. more control and conquer.

The high volume barking that police deploy when speaking to Black people is reminiscent of the tone used by an out of control dog owner trying to control an unruly animal.  The aggressive pumped out of control policing was ,  missing from the Capitol when the seat of political power was breached, instead, we had images of police walking hand in hand with white people who had just committed violent assault on the capitol.  The police were nothing short of serene even as they left to make their way home after a crime spree.

Imagine if the police that stopped Duante spoke to him calmly, even politely, about the alleged traffic violation and issued a citation? What if Potter had chosen reassurance when faced with a frightened 20-year-old instead of reaching for her ‘taser’. Why was she reaching for anything? Why did she need a taser?

Is the capture of a Black person accused of a misdemeanour so critical to the police that they operate a capture dead or alive policy for Black people?

Many have commented on the changes in the police handling of the aftermath of the killing of Duante Wright and have wrongly concluded that justice for police killings post-George Floyd will be swift. On the surface there appear s to be some movement. With calls for Potters resignation spearheaded by Brooklyn Centre Mayor Mike Elliot.  My position is that we cannot afford to make mistakes that lead to the loss of life of other people in our profession,” he went further and stated that he fully supports releasing the officer of her duties.” Not surprisingly Potter resigned, she wrote a short resignation statement to Police Chief Tim Gannon.

“I have loved every minute of being a police officer and serving this community to the best of my ability, but I believe it is in the best interest of the community, department, and my fellow officers if I resign immediately.”

Potters resignation was swiftly followed by her arrest.  We have seen this movie before a flurry of activity that acts as a pacifier to the protests followed by an activist predominantly white jury whose own anti-black belief system predisposes them to find the police not guilty.

Duante Wright is dead as a result of America’s failure to address the root of the crisis: America’s original sin, the depraved, barbaric assertion that Black people are not fully human.  It is not Policing that needs reformation. America needs a new era of enlightenment to eradicate its slavish devotion to white supremacy.

For policing in America to change America must change.