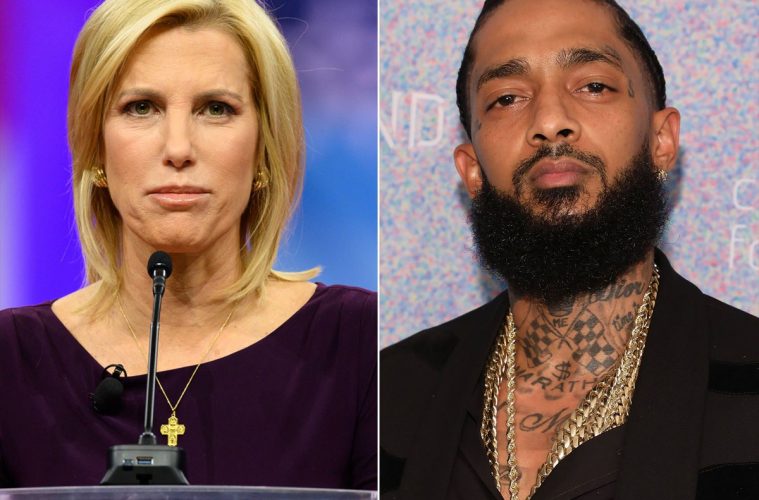 Ingraham mocked the memorial for Hussle Friday, a day after he was eulogized at the Staples Center in Los Angeles. Ingraham claimed on “The Ingraham Angle,” that he released a song called “‘FDT’ — F Donald Trump.’” Hussle is featured in the song which references President Trump but it was included in an album released by Compton rapper YG in 2016. Ingraham then shared a clip of the music video, which only included footage of YG, not Hussle.

“So … the chorus, it goes on and on,” Ingraham said later. “Is that related to the lowest unemployment ever basically for African Americans?”

Ingraham and Arroyo also laughed during the segment as they discussed the rapper born Ermias Asghedom. He was shot six times and killed in front of his clothing store, The Marathon, on March. Various tributes have poured in for the Hip star who was remembered for giving back to his community. He was 33 and left behind two kids.

Here's Laura Ingraham mocking a murder victim, just hours after he was laid to rest, because he opposed Trump 3 years ago. (Also, the man rapping in that video is YG, a person who is not Nipsey Hussle.) For shame.pic.twitter.com/02iBYdr5wo

Fox News has not offered any statement in regards to Ingraham’s comments and behavior but many in the Hip Hop community rebuked them. Rappers are now demanding that Ingraham be fired from the network.

“So lemme tell you what’s going to happen here…. @foxnews fires this disrespectful (expletive) by tomorrow,” The Game wrote on Instagram Sunday. “We are NO LONGER laying quiet while you continuously disrespect our brother, culture African Americans as a whole. I will use my platform & call on my peers to do the same.”

Snoop Dogg, who spoke at the memorial said “I’m in”. T.I. Also offered his support.

“This is Disgusting! You both are vile despicable, poor excuses for people. My expectations have already decreased so much for mankind in the past couple weeks that this hardly surprised me… especially from @foxnews,” wrote the rapper to his social media page.

R&B artist Tank created a petition to have Ingraham fired.

“REPOST! REPOST! REPOST REPOST!  Disrespecting the deceased is not news! It’s just disrespect! If this is not what @foxnewsis all about we shall see! #firelauraingraham #TheGeneral #TheMarathonContinues #RIP#NipseyHussle,” he wrote.

Controversy is not new to Ingraham. She previously told NBA superstar Lebron James to “shut up and dribble” in response to his criticisms against Trump. She also mocked parkland shooting survivor David Hogg for not getting into the college of his choice. She apologized for the comments to Hogg after the loss of sponsers to her show.