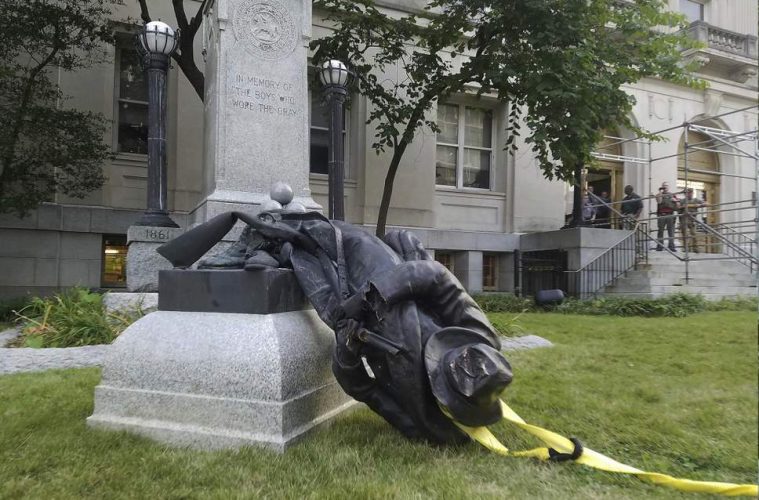 Pride Versus Prejudice: The Confederacy’s Place in History Today

William Faulkner once penned, “The past is never dead. It’s not even past.”

Today in America, we are often overwhelmed by the amount of attention our civil war memorials and statues receive. The debate of what to do with these relics from a dark time, not only for Americans but for the human race, remind us of the horrors of slavery and its impact today. The everlasting presence of the dead confederacy can be inescapable and stifling in the South.

Not only can confederate memorials, statues, and songs still be found in public places but Confederate Memorial Day is celebrated in Alabama, Florida, Georgia, Mississippi, South Carolina, North Carolina, and Texas. Confederate leaders such as President Jefferson Davis and General Robert E. Lee are even honored with their own holidays. As a society, our morbid history lives on in the argument, striking emotional chords nationwide.

The 2015 massacre of nine African Americans at the historic “Mother Emanuel” church in Charleston ignited a crusade to remove Confederate monuments, flags and other symbols from the public square, and to rename schools, parks, roads and other public works that pay homage to the Confederacy. We are forced to question the worth of these monuments, their representation in our history and their worth in our future.

Many argue that the proper place for Confederate memorials is no longer in a public forum but in a museum or even destroyed. They believe the preserved history only serves to hurt African Americans, reminding citizens of a time of barbaric slavery and racial suppression. This type of continual retelling of such a brutal past infects and manipulates tensions and threatens a sense of equality today.

On the opposite side, there are those that say that by destroying or hiding the statues, citizens are denying and destroying American history. White supremacists have latched onto the argument and further claim that abolishing the public presence of the confederacy erases white history and harms white Southern pride today.

Nearly 157 years after the start of the Civil War, countless Americans still argue about the root cause of the Confederacy. Many argue slavery was merely a side note in the long list of reasons states chose to secede the Union. However, in the case of Alabama, the state declared that “the institution of African slavery now existing in the slaveholding states” was “a moral, social, and political blessing” when they seceded in early 1861. Kentucky later followed suit, naming slavery in their official declaration to secede, boldly stating “the triumph of negro equality” would be a “horror.” When Mississippi seceded from the Union on January 9, 1861, their address expressed clear sentiments;

“Our position is thoroughly identified with the institution of slavery — the greatest material interest of the world…none but the black race can bear exposure to the tropical sun. These products have become necessities of the world, and a blow at slavery is a blow at commerce and civilization.”

Lastly, there is the infamous “Corner Stone” speech, by the vice president of the Confederacy, Alexander Stephens, which he proclaimed to be the “new constitution” of the rebel nation. In his Speech, Stephen’s said, “our new government is founded upon exactly the opposite idea; its foundations are laid, its cornerstone rests, upon the great truth that the negro is not equal to the white man; that slavery subordination to the superior race is his natural and normal condition.” It leaves nothing to the imagination on the Confederacy’s stance on African Americans, slavery, or its place in the war. This is quite damning evidence against the argument that African slavery was not found at the the Civil War, the bloodiest conflict in American history.

In the summer of 2017, white nationalists gathered in Charlottesville, Virginia, ostensibly to interrupt the local government from removing a statue of Confederate General Robert E. Lee. Sadly, a 32-year-old woman was murdered, and 19 individuals were injured when a speeding vehicle crashed into a crowd of counter-protesters. It was at this time, when President Trump infamously said of the white nationalist rally, “Unite the Right those opposing them, that there were “good people” on either side. The president’s statements confused and angered countless Americans, suggesting sympathy for white nationalist and pro-Confederate separatists. The attack in Charlottesville was horrific, but the city is far from alone.

In fact, the following year nearly 113 Confederate statues, symbols, and memorials were renamed, removed, or relocated from public spaces throughout the country. Those that defend what they believe to be the statues rightful place in public places say the change is occurring too swiftly, even though an estimated 1,740 Confederate monuments still stand today.

It has been argued that given the timeline of these holidays and memorials being created, they were never about merely honoring the dead. They were used to remind and scare the living, particularly African Americans and minority groups who had already been exposed to unbelievable amounts of prejudice and brutality, of their position in society. The actuality of these memorials still standing today is rare by historic norms.

Traditionally, when one party loses in their own homeland, the defeated do not usually preserve their symbols and material culture. According to Jane Dailey, an associate professor of history at the University of Chicago, “most of the people who were involved in erecting the monuments were not necessarily erecting a monument to the past. But were rather, erecting them toward a white supremacist future.”

During the 1913 dedication of a Confederate monument known as “Silent Sam” at University of North Carolina’s campus, the southern industrialist Julian Carr – a Ku Klux Klan enthusiast – urged the audience to support white supremacy, “with the same vigor that their Confederate ancestors had defended slavery.”

A report conducted by the Southern Poverty Law Center (SPLC) – an organization that monitors American far-right groups – revealed the installation periods of numerous Confederate memorials. The report highlighted two distinct time periods that experienced a significant hike in the production of Confederate memorials and dedications. As previously mentioned, the first period of time was around 1900, during the time of Jim Crow laws, when recently freed slaves were to enter society. The second period started in the ’50s and blazed through the ’60s, as the height of the civil rights movement challenged segregation. It was in the early 1950s that the rebel flag began to make it’s way back into popular culture.

Though such monuments allowed Confederate apologists to engage in a kind of nostalgia for a bygone era, it became obvious that purpose of these monuments was not only to honor the Confederate dead, who fought for the South’s right to preserve slavery but to uphold and defend white supremacy in the present. In 1951, The Chicago Defender, the largest black-owned daily newspaper in the world at the time, wrote;

“In a large measure, the rebel craze is an ugly reaction to the remarkable progress of our group.”

Over a century and a half since the Civil War, we are still left to ponder, what should we do with these monuments?

Currently, leaving the monuments where they stand may no longer be a viable option, even for those who support their presence. Horrifying incidents such as what occurred in Charlottesville call for increased security and supervision over certain monuments vulnerable to destruction and vandalism, causing points of tension throughout towns across the United States. The Department of Veterans Affairs has spent approximately $3 million on Confederate cemetery security since August 2017. An additional $1.6 million is to be budgeted for 2019, to protect the cemetery and other Confederate monuments.

Should we show respect to these memorials that hail from a time in which white supremacists used such public displays to maintain a shameful history but also as a tool to psychologically manipulate the growing confidence of African Americans across the country?

“Civil War monuments bear a constant testimony to all of this history, none of which should be forgotten. The monuments should remain…When racists revere these monuments, those of us who oppose racism should double our efforts to use these monuments as tools for education.

Although many statues are finally coming down, there are still some that are going up. There are various reports of an increase in Confederate monuments being erected on private property throughout the South. One such monument went up in Orange, Texas. The monument, on private property, is completely visible from the public interstate highway, including Martin Luther King, Jr. Drive.

At least 36 have gone up in North Carolina alone since 2000. According to the SPLC, at least 44 Confederate memorials have emerged since 2000, even showcased in Union states like Delaware. The idea of allowing a piece of history to be managed privately by individual citizens causes much controversy.

There are those that still believe museums may be too much glory for the vestiges of slavery. Therefore, in their opinion, the monuments should be melted down and Confederate dedicated streets renamed. They are history’s ruins. On the other hand, there are many citizens who argue that museums are the best location for such controversial pieces of history. In comparison, when European nations were also forced to reckon with such cryptic relics of a dark history, many were relocated to historical parks or exhibition centers. This was often done methodically, allowing the public to properly compartmentalize the sins and horrors of the past, without erasing or forgetting it.

History museums can offer an honest context of the Civil War, opening dialog for the future, even though it won’t be uncomplicated. As the Smithsonian Magazine said;

“As we museum professionals formulate our own approach to the thorny issues of where and whether and how to re-contextualize these toppled monuments to our Jim Crow past, we must recognize our own histories of complicity in the centering of white, male, hetero-normative heritages and the celebration of icons of white supremacy in our centuries of collection and display.”

The future of these statues and monuments is still yet to be decided. Once they were a representation of Southern legacy but that legacy is shameful. The South’s presence on the wrong side of history looms greatly even today.The American public needs to ask themselves if our current government should preserve such history so we are never doomed to repeat it or if the country should continue to hold such regard for a defeated rebel nation that waged war against the United States to preserve white supremacy and the enslavement of millions of people. The existence of such history must be determined, as each day it drives more of a wedge between a divided country and a separated South.