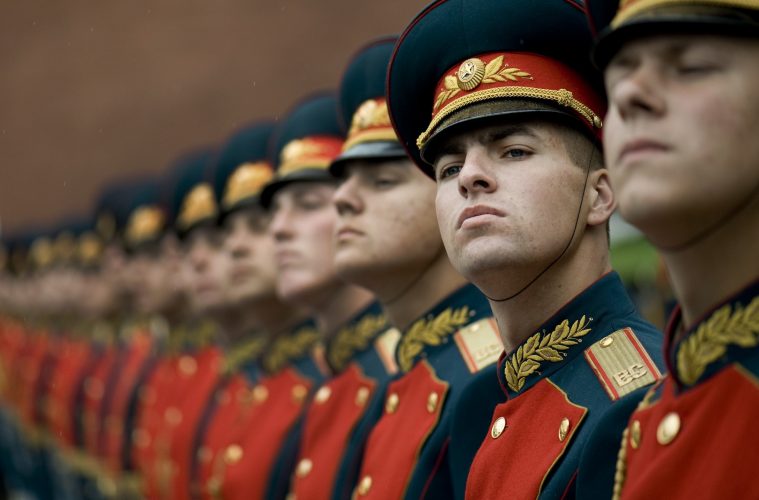 One Foot in the Door: How Russian Trade With African Countries Led to Arms Deals

Through much of the latter half of the previous decade and into the 2020s, the Russian Federation has been on the move and eyeing the African continent,  showing few qualms about their intentions.

With the Federation’s domestic economy battered and bruised by a sluggish oil market, dipping energy prices and U.S. sanctions on the Russian government, much like it did during the heydays of the Soviet state, the country is looking towards the energy and mineral-rich continent of Africa for swaths of multi-faceted trade agreements. In turn, Russia’s increasing efforts to establish trade partnerships in Africa has opened markets and offered possibilities to African countries desperate to kickstart their own economies.

Yet, most highly lucrative international deals often come with other incentives and side-letter agreements. And when it comes to African-Russian trade initiatives, these arrangements run parallel with the sale of weapons.

In April 2018 two men met in Moscow to discuss a number of deals that ranged from economics to military cooperation. Sergey Lavrov, Russia’s Foreign Minister, met with his Angolan counterpart Manuel Domingos Auguste to rekindle a relationship between Federation President Vladamir Putin and the then-newly elected President of Angola, Joao Lourenco.

The Russian Federation’s interest in Angola was the Catoca diamond mine, which Russia’s state-owned consortium, Alrosa, already holds a 32.8% share of, aside from its ownership of half the world’s diamond reserves.

However, Russia’s interest in Catoca reaches further back into Angola’s political history to the Federation’s relationship with former Angolan President Jose Eduardo dos Santos, who stepped down in 2017 after nearly four decades in power. President dos Santos’ daughter Isabel dos Santos is still estimated to be Africa’s richest woman, worth an estimated $2 billion.

As a testament to the level of corruption associated with the former president’s administration, Isabel  is currently facing possible fraud charges in Angola and Portugal, resulting in her assets recently being frozen in both countries. Nevertheless, during President dos Santos’ long and heavy-handed reign an expansion of Russia’s mining conglomeration in West African nation was already in the works.

In 2013 Catoca and Alrosa found the Luaxe Luele pipe, which Catoca had spent $200 million exploring and developing, that has some mining experts, like Vladamir Marchenko, Alrosa’s Deputy CEO in Africa, claiming this may be one of the largest discoveries of the precious mineral in decades. Alrosa is the principal shareholder in the joint venture with 50.5% ownership of the project.

Angola plans to begin processing the pipe this year and pledged to expand production to 14 million carats by 2023. However, the story does not end there.

Like many of the Federation’s trade deals on the African continent, an agreement with Putin’s Russia comes with added security or a military component.

One year after Russian Foreign Minister Lavrov met with Angolan Foreign Minister Auguste, it was President Lourenco’s turn to visit the Federation’s capital. During a four day visit to Moscow, from April 2 to April 5, 2019, Angola’s freshly-elected president revealed his plans to expand his nation’s business with the former Soviet Union.

This included the manufacturer of Russian weapons for sale to the Southern African market and possibly to other nations throughout the continent. For decades Angola has been one of the largest purchasers of Russian weaponry and military technology in Africa.

President Lourenco unveiled his initiative during an interview with Russia’s state-owned new agency Har-TASS stating that Angola planned, “ to evolve from our current state of purchasers of Russian military equipment…towards becoming the manufacturers.”

The danger of such an endeavour would  risk possibly flooding the continent with more weapons and further impeding the progress of UN resolution 2457, unanimously adopted in February 2019, designed to halt the seemingly endless array of conflicts in Africa. In the dark and murky world of arms sales, Angola manufacturing Russian arms for sale throughout Africa could set in motion another ungovernable pipeline for more military hardware that will undoubtedly find its way into the hands of rebel groups, warring factions, and autocratic leaders.

Some of these groups have long lists of human rights violations, vying to cling to power and violently suppress dissension. President Lourenco made it clear that his ambition to manufacture Russian weapons for profit was one of his key foreign policy initiatives.

Likewise, Russia aims to make arms deals and security agreements with as many African countries as possible a part of its primary foreign policy objective. Last year alone, Russia supplied military equipment to Angola equaling $2.5 billion, which included fighter aircraft and air defense systems, to a nation with few known enemies and few bouts with terrorism.

During the previous millenium, at the height of Soviet influence, Russian intervention, particularly in its Eastern European and Asian bloc was shaped by hostile military takeover or the installment of a communist puppet regime. The Russian Federation which no longer possesses the necessary military might and often seeks to avoid international backlash, has exercised a far more effective paradigm through the use of advantageous trade deals.

For the nations that the Soviets would have made overt collaborators, the Federation is now more likely to seek as customers. Russian President Vladamir Putin understands that a solid trade agreement to draw African nations, many of whom have struggling economies, into the Federation’s sphere of influence, is every bit as effective and far more lucrative than rolling in tanks and troops.

Late last year, in October, President Putin hosted a two day conference in the former Olympic village of Sochi with scores of African leaders and officials to focus on initiating or bolstering security and arms deals. Now involved with at least 23 separate security and armaments cooperations with African countries, Russia has solidified its place as the largest supplier of arms to the continent. A number of these security cooperatives include agreements with Russian military contractors like the Wagner Group, led by Yevgeny Prigozhin, that can supply training and troops. For in several African countries, Russia’s state-owned industries have become a highly useful tool in establishing economic footholds that often pave the way for arms deals.

In Guinea, Russia’s state-owned aluminum giant Rusal, as with Alrosa, is used to establish trade relations. Rusal sources a third of the bauxite needed to produce alloy the company sells to auto manufacturers. In Guinea, Rusal, run by Oleg Deripaska, owns the Kindia Bauxite Company. However, U.S. sanctions imposed on Rusal in 2018 have crippled the company’s sales, severed its market share in half, and forced CEO Alexandra Bouriko, and seven other directors to resign. Russia has also dealt arms to Guinea and has openly advocated for the African nation’s repressive leader, Alpha Conde. Conde is seeking to alter his nation’s constitution, amidst a flurry of volatile and deadly protests, to allow him to run for a third term.

As with other African countries, the danger of selling arms, without humanitarian conditions, to dictatorial leaders, like Alpha Conde, is that these weapons can easily be turned on a populace to stamp out resistance to solidify their power. But advocating for leaders like Conde comes with great benefit. Should Conde gain a third term, it would virtually ensure Rusal can continue to do business in Guinea, while at the same time sidestepping sanctions that bar the aluminum company from selling to U.S. customers.

Another concerning example of joint industry and arms deals may be playing out in Somalia, where they recently announced it would accept bids for 15 newly discovered offshore oil blocks expected to produce at least 1 billion barrels of crude. The company that coordinated the surveys of the blocks was Soma Oil & Gas. Soma, on its face, is a British company, based in London and led by CEO Richard Sheppard. The company was established in 2013 to revitalize Somalia’s oil production. Yet Soma’s primary shareholder is Winter Sky Investments owned by Russia oligarch Alexander Dzipharidze, owner of Eurasia Drilling, Russia’s largest oil outfit. Soma Oil & Gas is also co-chaired by Dzipharidze’s son Georgy. Soma’s links to the Russian government means the possibility for arms deals.

Similar to the Federation’s trade deals with Angola, Guinea, and other African nations, Russia is drawing up plans for a side-letter security arrangement with Somalia, to assist the war-torn nation in its ongoing struggle with Al-Shabaab. The Federation is also seeking to establish its first-ever naval base on the continent in the breakaway province of Somaliland. However, Somalia has been under a UN arms embargo since the early 1990s. Yet it seems talk of a security deal was in the works before Somalia publicly announced the opening of the oil bidding process in 2019, with plans for production this year.

Negotiations for arms and security began as early as 2016 when Somalia’s former Prime Minister, Omar Abdirashid, met with Russian Foreign Minister Sergey Lavrov. The following year, these talks continued when Lavrov met with now-Somali Prime Minister Hassan Ali Khayre in Moscow, reportedly to discuss the details of a possible security arrangement. The Russian Foreign Minister recently noted that his country was, “ready to consider cooperating with Somalia’s military technical field.” The Russian government has also acknowledged it would not enter into a security arrangement with Somalia unless the long-standing embargo was lifted and only under the pretense of assisting Somalia against Al-Shabaab. Nonetheless, it should also be noted that both Russia and China are openly lobbying the UN to lift the arms ban against Somalia.

Though the civil war in Somalia has seemingly ceased, it is still negotiating a Production Sharing Agreement (PSA) with its member states. But of late, these talks have grown contentious between a number of these states, namely Galmudug and Puntland. Russian weapons pouring into Mogadishu could at the very least tip the balance of these the negotiations in the central government’s favor. At worst, some fear such an influx of weaponry could fuel internal conflict in a region prone to violent and long-lasting civil war. Though Russia continuously expresses their intent to sell arms would be geared to strengthening the central government against terrorism, these types of arrangements in such a volatile region are often met with a mixture of fear and skepticism. A number of military experts have reiterated these sentiments not only in regards to Somalia, but to a number of African countries. According to Brigadier General Gregory Hadfield, the U.S. African Deputy Intelligence Director, “outside of selling arms for their own economic benefit, China and Russia are not doing much to help counter extremist groups.”