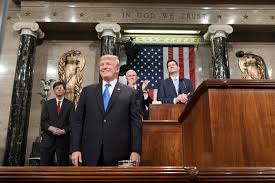 Late term Abortion and Trump’s State of the Union Address

“To defend the dignity of every person, I am asking the Congress to pass legislation to prohibit the late-term abortion of children who can feel pain in the mother’s womb…Let us work together to build a culture that cherishes innocent life. And let us reaffirm a fundamental truth: all children – born and unborn – are made in the holy image of God”

On Tuesday night, while giving his second State of the Union address, President Trump voiced his intentions for a subject difficult for most Americans to tackle: late-term abortions. The President called for legislation that would ban such procedures for women, nationwide. During the speech, he mentioned bills passed in New York and Virginia that would lessen abortion limitations.

Trump quoted divisive remarks made by the beleaguered Virginia Governor Ralph Northam, a Democrat, and singled out New York’s recently passed Reproductive Health Act. Such measures have taken fierce backlash from anti-abortion groups over the past month. Meanwhile, many Democratic congresswomen wore all white outfits, as a symbol of women’s rights and a reference to the suffragettes who fought for equality before them. Many of them remained seated and physically unmoved, while others shook their heads in disagreement.

Late termination of pregnancy or late-term abortion refers to abortions performed before the 24th week of pregnancy. Pregnancies usually range from 38 to 42 weeks. Abortion is widely considered a controversial procedure, particularly later abortions, as the fetus is considered more likely to survive outside the womb. Data shows that abortions occurring later in pregnancy are not at all common. In 2015, nearly 91% of abortions were operated on at 13 weeks of pregnancy or earlier. 7.6% occurred between 14 and 20 weeks, and only 1.3% happened at 21 weeks or thereafter.

A majority of states, 43 in all, ban abortions after a particular stage of pregnancy. Seventeen states ban abortion after about 20 weeks post-fertilization because it is believed the fetus can perceive pain at this point. 20 states allow late-term abortions to protect the life and health of the woman. While only eight states and Washington, D.C., have no restrictions on abortion time periods.

New York’s Reproductive Health Act was signed by Governor Andrew Cuomo on Jan. 2 – the anniversary of the landmark Roe v. Wade Supreme Court decision that guaranteed a woman’s right to an abortion.  The new law codifies a woman’s right to access abortion in New York. It states, abortions are allowed, in New York, before the 24th week of pregnancy and after the 24-week mark, abortion is permissible when “necessary to protect the patient’s life or health” or if there is no capacity for the fetus to survive outside the womb.

Many conservatives predict the act will increase access to late-term abortions and were incensed by Cuomo’s choice to light New York landmarks pink, to observe the passing of the bill.

Meanwhile, a bill in Virginia would have made it easier for women to get abortions in the third trimester of pregnancy by requiring the approval of only one doctor instead of the three as mandated under current law. However after Governor Northam’s comments indignation quickly spread, with a number of listeners understanding them as advocacy for infanticide.

Leana Wen, President of Planned Parenthood, escaped to the Internet to comment on the president’s intentions during the State of Union address. Wen, an attendant via invitation of Speaker Nancy Pelosi, said, “Restrictions on abortion later in pregnancy prevent health care providers from giving their patients the best care possible. It’s my job to provide my patients with the information they need to make the best decision for themselves. I trust my patients; I trust women.”

As previously noted, these types of abortions are extremely rare. Many women choose to terminate a pregnancy due to fetal medical conditions or because of the threat pregnancy may pose to their health. Dr. Wen’s presence and commentary are noteworthy, especially when women’s reproductive rights seem to be under constant threat. Such observations are a reminder that many Americans support access to safe and legal abortion. 73 percent of Americans, on either side of the party line, do not want to see Roe v. Wade reversed. In these times, a period in history, when congresswomen sit united not only in color but in sentiment and as minorities. We are living in an age when once again aspects of Roe v. Wade are up for debate, it is critical we stand up for our own morals, whichever side that may be.