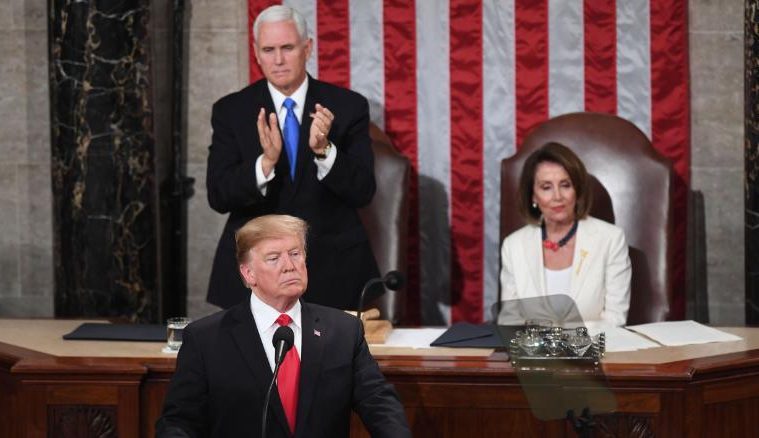 A Problematic State of the Union Address Tinged with Lies

Similarly, to the majority of Donald Trump’s presidency, the lead up to the 2019 State of the Union has been met with extreme controversy.

Prior to the deliverance of the SOTU on February 5, 2019, Speaker of the House Nancy Pelosi successfully prompted President Trump to reschedule and postpone his Congressional address until after the longest government shutdown in US history had ceased.

As the days led up to President Trump’s anticipated speech, various sources predicted that Trump would offer a unifying vision of various goals for America, presented through a bipartisan and cooperative lens. However, that did not really happen.

The 45th President of the United States started by acknowledging the grand strides American women have made; exhibited by the most women ever in the institution’s history being elected to the 2019 US Congressional Session. Currently, 127 women hold seats in the US Congress, encompassing 23.7% of the 535 members in the legislative branch of the federal government.

President Trump then went on to criticize and attack a woman’s right to choose by addressing the contentious bill recently passed by the New York Legislature.

On January 22, the Democrat-led NY Legislature and Governor Andrew Cuomo worked together to pass the Reproductive Health Act. This law has been met by right-wing outroar and the mass spreading of fake news in all forms of dialogue throughout the country. During his address Donald Trump continued the extension of these mistruths as he claimed that this piece of legislation allows “a baby to be ripped from the mother’s womb moments before birth” and that these “are living, feeling, beautiful babies who will never get a chance to share their love and dreams with the world”.

The President’s assertions are inaccurate.

The Reproductive Health Act only permits third-trimester abortions, those that occur after the 24th week of pregnancy, if it is essential and necessary to protect the life of the mother, or if there is an “absence of fetal viability”. Under the New York law, health-care professionals, who are to use their qualified judgment to determine if the mother’s health is in jeopardy, ultimately authorize a late-term abortion.

Stacey Abrams’ formal response to the SOTU acknowledged the current right-wing opinions surrounding reproductive rights and how the President has permeated the debate with inaccuracies. Abrams stated that “it is immoral to allow politicians to harm women and families to advance a political agenda”.

Abrams concluded by stating that although she is “disappointed by the President’s approach to [the United States’] problems, [she still does not] want him to fail. But we do need him to tell the truth.”