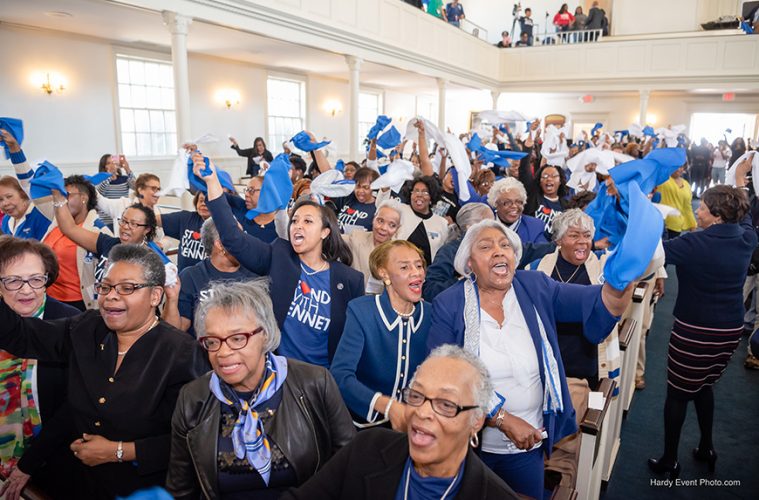 Brooke Ashley Kane, Miss Bennett College, was thankful for the outpouring of support. The political science major urged her fellow classmates to remember that the bell was their icon.

“Bells are strong, and they will never stop historically ringing. As Bennett Belles we too are strong, and we must hold ourselves to a higher standard and ensure that our ringing voices are heard, not only for the sisterhood within these gates but in the world in which we expect to make a difference,” Kane said.

The campaign began eight weeks ago when the Southern Association of Colleges and Schools Commission on Colleges decided last December to remove Bennett’s membership. Social media sought to help the university. Dawkins said Bennett would appeal its accreditation revocation and was humbled by all the donations. She explained that Alumnae worked on the campaign, and banks, corporations and Papa John’s Pizza Foundation gave large donations such as $1 million.  Students from across the country sent money through mobile apps, and quarters were also collected by children to give what they could.

“We appreciate each and every gift that we were given, no matter how small or how large,” Dawkins said to The News & Observer. “What matters most is that people gave, and they gave from the heart.”

“Some,” Dawkins added, “might even call it a miracle.”

The recent homophobic and racist attack on ‘Empire’ actor Jussie Smollett prompted his fans to donate in his name. High Point University offered a challenge grant of $1 million. Nido Qubein, president of High Point, said the efforts were not just about money.