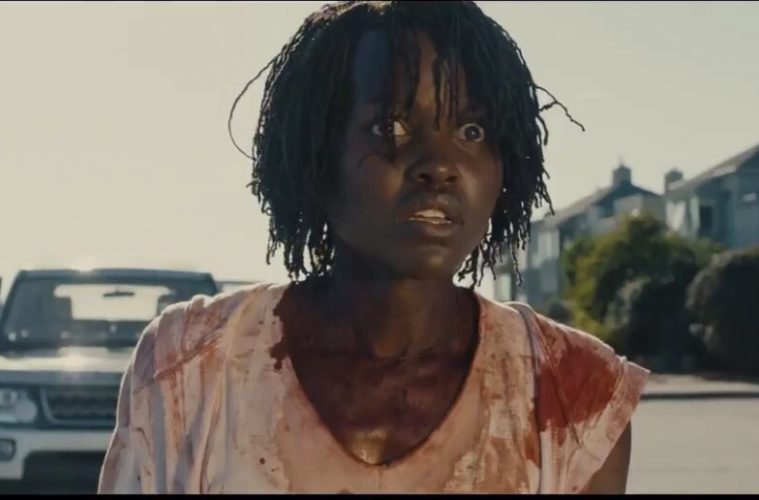 Oscar winner Jordan Peele released the trailer to his anticipated horror flick, Us, on Christmas Day. It is the latest offering from the writer-director who won an Oscar in March for best-original screenplay for his debut Get Out.

The 2:23 minute clip, starring Oscar winner Lupita Nyong’o and Winston Duke, immediately trended worldwide. It was a stroke of genius on Peele’s part to transform the Hip Hop beat ‘I Got 5 On It‘ into a score for a scary movie that hints about people being their own worst enemy. The haunting visuals send a shiver up the spine as the familiar song narrates the action of the family crying, ripping off masks and reaching for bats to scare away their clones.

Beyond that, there was another shift in the standard fare. The movie depicted a dark skinned family as the leads with no ambiguity as to their race. Nyong’o is of Mexican-Kenyan descent and Duke is Trinidadian. The children in the movie are portrayed by Shahadi Wright and Evan Alex. All of the actors have melanin that is not the go to aesthetic in Hollywood.

It goes without saying that Black people come in all shades. However, the entertainment industry prefers to highlight those that have a lighter complexion or racially ambiguous. Often times, the male lead of a movie will be of a darker pigmentation but his wife and children are not. That is not the case with Us. It was deliberate on Peele’s part as he explained to The Hollywood Reporter.

The casting choice was heralded on social media for its representation. Many users were excited that they could see themselves on the screen and in movies that had nothing to do with slavery. There were many Sci-Fi fans who were happy that Black characters were being centered in gore. This is a melanin rich family haunted by versions of themselves, lack of rhythm and the audience is left to wonder why.

Much like Get Out, Peele is crafting a new franchise fresh out of his imagination with Us. In recent years, there has been an endless stream of reboots but this an original horror movie and mythology all of its own featuring Black characters who are getting spooked.

Us opens in theaters on March 15, 2019 and tickets are now available for purchase.