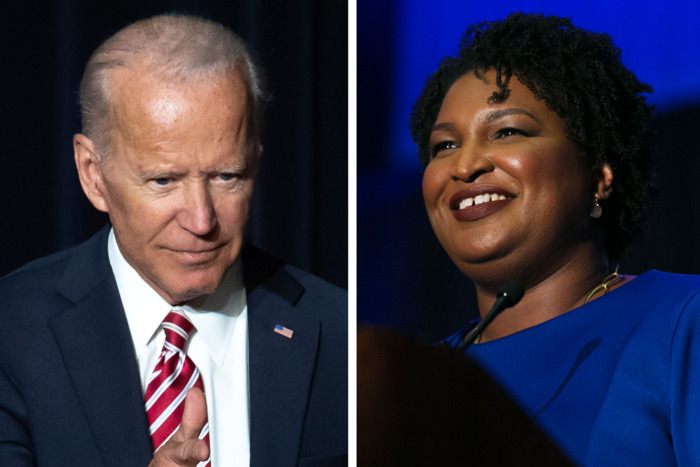 Axios reported Thursday that advisers to former Vice President Joe Biden are considering a 2020 presidential bid with a pledge that Stacey Abrams would be his running mate.

Those closest to the 76-year-old politician believe that his entry into the crowded Democratic field with Abrams on the ticket would show he “isn’t just another old white guy.” Others felt that the potential rollout would be gimmicky as candidates do not traditionally reveal who they will be running with before securing the nomination. Abrams would also be seen as a means of blunting criticism from Biden’s past which includes his treatment of Anita Hill according to Rev. Al Sharpton.

Presidential historian Michael Beschloss said no successful candidate had named a running mate this early in the primary process but that Biden could potentially benefit from this decision.

“If Biden were to name his running mate long in advance of the Milwaukee convention, it might be very good politics,” Beschloss said. “It also might ultimately provide good government. Voters in the primary process deserve to know as much as possible about the future they are opting for.”

Biden and Abrams have not yet addressed the speculation but the Associated Press reported last week that Biden and the popular Georgia democrat met for lunch in Washington. It was described as being at Biden’s request.

Abrams, who lost her bid to become Georgia’s governor in November, has become a darling in the party. She was chosen to give the Democrats’ response to President Trump’s State of the Union address in January and her name has been mentioned as a Senate candidate and presidential candidate. On Tuesday at Vanderbilt University in Nashville , Abrams told the audience what she’d be looking for in a nominee.

“My two requirements,” Abrams said. “One, you have to tell me what you’re going to do about voter suppression. And two, you have to believe Georgia is a swing state.”