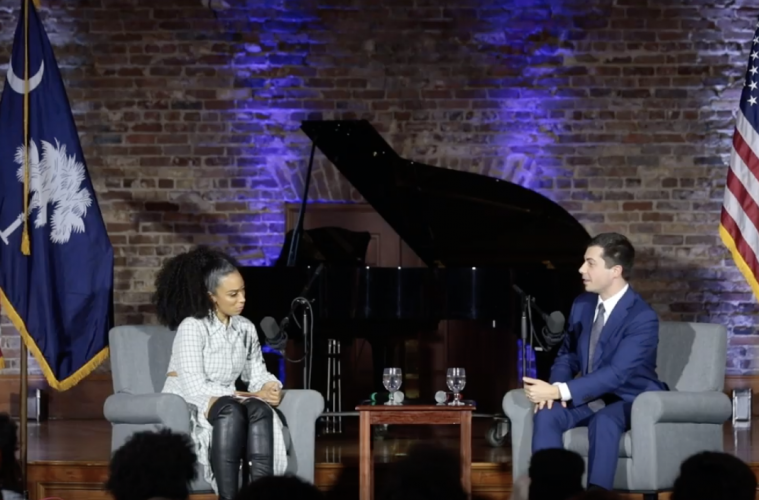 Pete Buttigieg has a leg up on his fellow Democratic presidential candidates after emerging as the winner of the of the 2020 Iowa caucuses, but that isn’t distracting his competition or the media from the fact that he has some major issues with black voters.

Buttigieg, the 38-year-old charismatic politician who has served as the mayor of South Bend Indiana for the past eight years has only 2% support from Democratic black voters compared to Vice President Joe Biden’s 48 % and Senator Bernie Sanders’ 20 %, according to a recent Washington Post-Ipsos poll. While he has outlined a specific strategy  for the black community that calls for reparations and black empowerment, his critics are telling a different story.

Buttigieg and his campaign are offering the black community The Douglass Plan, a comprehensive strategy that seeks to end systemic racism. On his campaign website, Buttigieg’s plan includes methods aimed at  “reforming broken criminal justice and health systems, strengthening access to credit and injecting capital into the Black community, and taking bold steps toward fulfilling long-broken promises of true equity.”

In the midst of these campaign promises, critics are calling out Buttigieg on the campaign trail and accusing him of being a part of the problem holding black people back in America. Henry Davis Jr., a South Bend, Indiana councilman, tweeted some receipts on  Feb. 8 to explain why Buttigieg has been perpetuating racism in his city.

As a Councilman in #SouthBend, I know why @PeteButtigieg looked like a deer in headlights last night when talking about systemic racism in the South Bend Police. He tolerated it, he perpetuated it, and last night he lied to millions of Americans about it.

“As a Councilman in #SouthBend, I know why @PeteButtigieg looked like a deer in headlights last night when talking about systemic racism in the South Bend Police. He tolerated it, he perpetuated it, and last night he lied to millions of Americans about it,” Davis tweeted.

In Buttigieg’s South Bend, of the 714 people who were arrested for drug-related offenses in 2018, 384 of those people were black,

The Intercept reports. Add to that the fact that a black fire chief and

police chief were both fired under Buttigieg’s leadership and Black Lives Matter activists aren’t holding back from speaking out.

When moderator George Stephanopoulos questioned Buttigieg about some of these accusations during the 8th Democratic debate on Feb. 7, the mayor admitted that he had to be intentional about winning the trust of black voters.

“I’m going to have to work to earn that vote just as I did in South Bend,” Buttigieg said.

Whether Buttigieg is changing his tune for the sake of votes or genuinely trying to make a change remains to be seen. However Biden, his fellow Democratic presidential hopeful, made it clear that gaining support from the black community is vital in order to win the Democratic Party nomination.

“No one has ever won the nomination without being able to get overwhelming support from the African American community,” he said.

Check out how Buttigieg responded when political commentator and attorney Angela Rye asked about which black women he would choose for his inner circle:

If he had to name two black women to have in his ear while in the White House who would Democratic candidate #PeteButtigieg choose? Listen to his response and comment below. 👇🏾