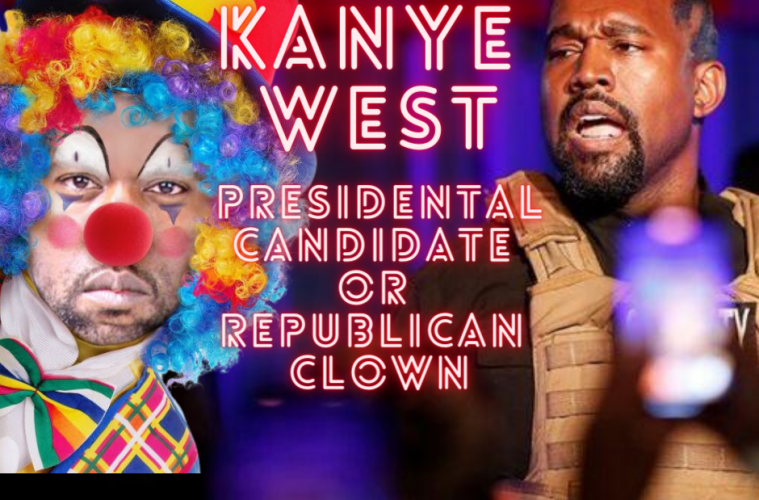 When Kanye West stepped on stage at the 2015 MTV Video Music Awards and announced
that he would be running for president during his acceptance speech for the Michael Jackson
Video Vanguard Award, he was met with a standing ovation and roaring applause from the
audience. Perhaps in part, because no one thought he was serious. Fast forward five years
later, and West has made good on his promise. But not without the help of the Republican
Party.

West launched his presidential campaign with a Twitter announcement on July 4, 2020, and
followed it with an exclusive interview with Forbes where he renounced his long-standing
support of President Donald Trump saying, “I am taking the red hat off, with this interview.”
Yet, that admission hasn’t helped the rapper stave off suspicions that he is trying to siphon
off Black voters from Vice President Joe Biden in an effort to help Trump get re-elected.
When asked if that was West’s goal in launching his campaign, the rapper responded, “I’m
not denying it.”

We must now realize the promise of America by trusting God, unifying our vision and building our future. I am running for president of the United States 🇺🇸! #2020VISION

Those suspicions were only furthered when Lane Ruhland, a GOP election lawyer, was
spotted delivering ballot signatures to election officials for the West campaign. Ruhland has
also worked for Trump, most recently representing the Trump campaign in a lawsuit
against a local Wisconsin television station over an ad criticizing Trump’s COVID-19
response. Ruhland, however, is not the only GOP operative working to help get West on the
ballot. Gregg Keller, the former executive director of the American Conservative Union,
assisted with the effort in filing a petition for West to appear on the ballot in Ohio, another
key state in the election. Keller is also listed as the contact for the campaign in Arkansas according
to the New York Times.

In addition to West receiving Republican support to get on the ballot in a few other states, he
also met with White House Senior Advisor Jared Kusher, for what Kushner said was a
“policy talk.” While West told Forbes that their chats were “almost daily,” Kushner told CNN
that they only speak “every now and again.”
The speculation as to the legitimacy of West’s presidential aspirations comes not just from
his cooperation with the GOP, but also from concerns about his mental health.
When West held his first campaign rally in North Charleston, South Carolina, he delivered an
incoherent monologue on a variety of topics such as abortion, the legalization of marijuana,
and religion. At one point, West became emotional and burst into tears while revealing that
he and his wife Kim Kardashian-West debated aborting their first child. He then exclaimed
that he believes financial incentives such as” everybody that has a baby gets a million
dollars,” would help discourage other women from having abortions. The erratic display put
on by West at the rally caused many to question his mental health, and wonder if this
presidential run was driven by a manic episode caused by West’s bipolar disorder.
Whatever the motivation, it seems that voters aren’t interested in what Kanye West has to
offer.

In a recent POLITICO/Morning Consult poll, it was revealed that West had only
garnered 2% of the support among all registered voters. The numbers among Black voters
were just as dismal with West only having 2% of the Black vote as well. The lack of support
from Black voters should come as no surprise as West has not only proclaimed his fondness
of President Trump over the years but has also embraced extremely anti-Black rhetoric.
According to the Associated Press, his most recent remark came from the same South
Carolina rally, where he claimed Harriet Tubman “never actually freed the slaves, she just
had them work for other white people.”

What once would have been thought of as unimaginable coming from the mouth of Kanye West,
has now become routine. Since 2016, West has continued on a path of anti-Black behavior such as his
“multiracial women only” casting call for his Yeezy Season 4 New York City Fashion Week show,
and his infamous TMZ rant where he claimed slavery was a “choice,” and elicited an impassioned response
from former TMZ correspondent Van Lathan. Lathan explained to West, “there’s fact and
real-life consequence behind everything that you just said. While you are making music and
being an artist and living a life that you’ve earned by being a genius, the rest of us in society
have to deal with these threats to our lives.”

Perhaps the reality of that threat is why Black voters have chosen to distance themselves
from West’s quasi-presidential run amid what may be the most important United States
presidential election in decades. Nonetheless, the late campaign launch, incoherent tweetstorms,
and erratic rallies haven’t stopped Kanye West’s campaign from continuing to move
forward as his camp most recently picked up a petition to appear on the

presidential ballot in Tennessee. While it is unclear if there is any political party affiliation with the team
responsible for helping him file the petition, it is possible that the Republicans assisting the
West campaign in Wisconsin may have committed election fraud as the state’s Democratic
Party claims they have not only submitted the signatures late but that the nomination papers
also include false addresses and signatures. Among those false signatures were names like
“Bernie Sanders” and “Mickey Mouse.” Additionally, the complaint included affidavits from
people who claimed they were tricked into signing their names for West’s petition.

THIS IS A GOD DREAM pic.twitter.com/e1Wkui3ULj

Despite the lack of a clear platform and the threat of election fraud looming over the
campaign’s head, West has still managed to garner endorsements from a number of
celebrities such as Elon Musk, Nick Cannon, and his wife Kim Kardashian.