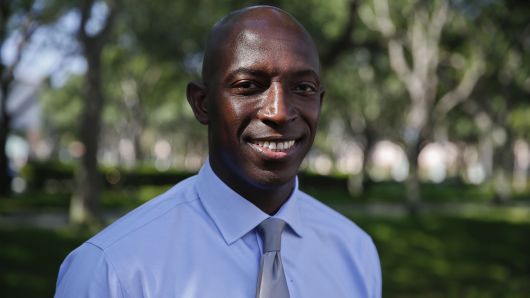 Florida Mayor Wayne Messam announced Thursday that he will be running for president in 2020.

The 44-year-old Democrat announced his candidacy on CNN’s “New Day” program. The announcement was specifically made on March 28 in a nod to Rev. Dr. Martin Luther King Jr. as it is the anniversary of King’s final march. The civil rights leader marched with sanitation workers who were on strike in Memphis in 1968.

Messam has been the mayor of Miramar which has 140,000 people, since 2015. He’s focused on gun control, worked to stop oil drilling off the coast and guided his city through Hurricane Irma in 2017. Messam said he was the best person to defeat President Donald Trump because he got things done.

“We don’t have the luxury to shut down our governments,” he said. “When you look at what we’re doing in the city of Miramar in terms of bringing high-wage jobs to America, taking jobs away from China ― we’re actually taking head-on issues in terms of gun control, issues in terms of our environments. These are really important issues.”

Messam previously acknowledged that his bid to secure the Democratic nomination and presidency. He is relatively unknown and does not have the national identification such as other declared candidates like Sens. Kamala Harris, Bernie Sanders and Cory Booker.

“I see it to be a unique opportunity for Americans to look at another option of leadership,” he said. “When you look at what is going on in Washington, the status quo is who is stepping up to be our next president. … When you look at a mayor, Americans see mayors favorably. We are at the front line of what Americans are dealing with every day.”

Messam also released a video titled “Your Champion” as to why he should be given a chance. In the clip, he stressed the desire to fix what is broken in Washington.

“When you have a senior citizen who can’t afford her prescription medicine, Washington is broken. When our scientists are telling us if we don’t make drastic changes today, the quality of our air will be in peril, Washington is broken,” Messam says in the video. “Everyday people are graduating from universities with crippling debt stifling their opportunity for financial mobility, that is what’s broken with this country.”

Watch the video of Messam’s presidential announcement below.