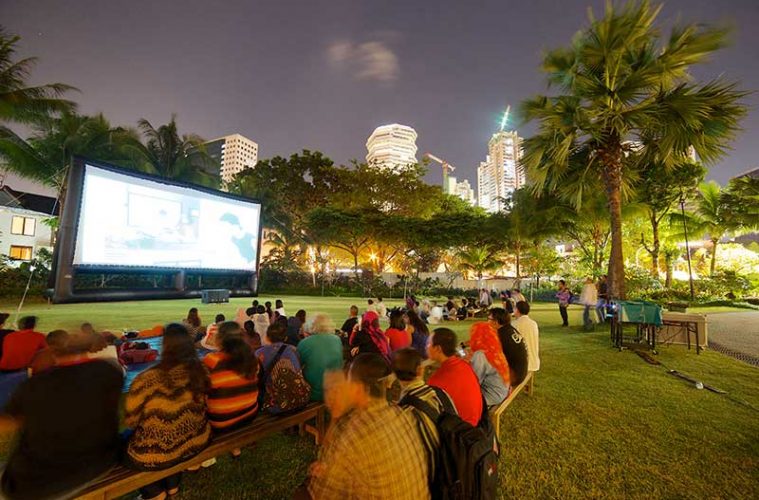 Now, midway into the summer season, we rounded up a list of outdoor screenings of Black films on schedule. Several of the films are new and some are old, others are funny and sad, and there are films that are dramatic and action-packed.

Here’s a list of public and outdoor screenings of Black films happening this summer:

The cult classic 80’s martial arts film is screening tonight at Herbert Von King Park in Bedford-Stuyvesant at 8:45 p.m. The comedic movie follows a martial artist Leroy, and his quest throughout Harlem to save his love interest against his biggest arch nemesis Sho’Nuff.

In April the film industry lost John Singleton, one its most notable and prolific black filmmakers and directors. His debut film, “Boyz in the Hood” is a coming-of-age film exploring the lives of four black teens in crime and gang-ridden Los Angeles. The movie remains a culturally relevant film today. Free film screenings of this will show at the Long Meadow at Prospect Park on July 19 at 7:30 p.m.

Black Panther at various parks in Manhattan and Queens

The blockbuster hit film featuring one of Marvel’s strongest black superheroes and brought us the world of Wakanda, has several screenings this summer. Tomorrow (July 19), the film will screen at the J. Hood Wright Park in Washington Heights starting at 8 p.m. It is going to screen again in Queens for two showings. One on July 25 at the Macneil Park at 9 p.m., and at Highland Park at 7:30 p.m.

Coming to America at Bryant Park

The classic Eddie Murphy comedy exploring the journey of an African prince and his quest to find an American wife, will screen to the public on the lawn of Bryant Park. Guests are advised to arrive by 5 p.m. on July 22. The film will screen at sunset.

In this sequel film, boxer Adonis Creed is up to challenge the son of the man who killed his father. Showings of the film will play on July 26 at Ferry Point Park in the Bronx at 8:30 p.m. And on September 8 at Field 42 at Randall’s Island Park at 7:30 p.m.

Sorry to Bother You at Herbert Von King Park

The satirical sci-fi film exploring the racial stereotypes in the workplace, and how the movie’s lead character finds a way to bypass the. A screening will show at Herbert Von King Park on July 26 at 8:45 p.m.

One of the newest members of the Brooklyn Nets is not immediately recognizable in the film, where he dons aged-makeup throughout the entirety of the movie. The comedy sports film starring NBA player Kyrie Irving and a host of other famous and legendary basketball players will screen at two locations. The first screening will be at O’Donohue Park in Queens on July 28 at 9 p.m. Then it will screen again at the Hansborough Recreation Center in Manhattan on August 2 at 8 p.m.

If Beale Street Could Talk at Saratoga Square Park

The film based off the James Baldwin book of the same name screens at Saratoga Square Park on July 30 at 8:45 p.m. The story follows an expectant Harlem woman and her struggle to prove the innocence of her boyfriend.

Do The Right Thing at Hudson River Park’s Pier 63

The classic Spike Lee joint highlighting racial tension on a summer day in Bedford-Stuyvesant turns 30 years old this weekend. Nearing the end of its anniversary month it will play on July 31 at 8:30 p.m. at Hudson River Park. The film screening is part of the Hudson Riverflicks series.

August comes with classics and historical and fictional dramas

Consecutively, another Spike Lee film screens again. The coming-of-age film focusing on a Bedford-Stuyvesant family and their struggles with life and neighbors, screens on August 1 at 6 p.m.

The Oscar-nominated film based on the Selma to Montgomery march led by Dr. Martin Luther King Jr. screens on August 22 at 6 p.m.

A documentary film showing footage from Aretha Franklin’s 1972 concert with a choir in Los Angeles. The screening will be on August 22 at the park’s Richard Rodgers Amphitheater. The film will start at 7:30 p.m.

The Hate U Give at Hansborough Recreation Center

Finally, one the last black films to screen outdoors. The film based on the young adult novel of the same name is going to screen on August 23 at 7:30 p.m. Actress Amandla Sternberg plays a teen tied between two worlds. After a close friend is murdered, she is forced to tackle both.