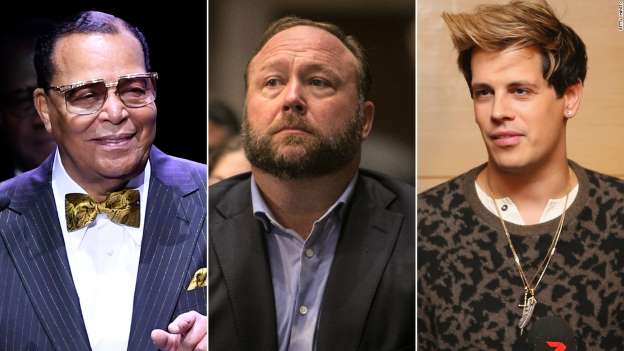 Facebook announced Thursday that it banned Alex Jones, Infowars, Milo Yiannopoulos, Paul Joseph Watson, Laura Loomer, Paul Nehlen, and Louis Farrakhan from all its platforms under their policies against dangerous individuals and organizations.

The individuals were declared as being associated with hate speech, false news and extremism. The action comes a year after Facebook founder Mark Zuckerberg testified before both the Senate and the House in April of last year. Zuckerberg and Facebook have been accused of not doing enough to stop the spread of misinformation and inflammatory content.

“We’ve always banned individuals or organizations that promote or engage in violence and hate, regardless of ideology. The process for evaluating potential violators is extensive and it is what led us to our decision to remove these accounts today,” a Facebook spokesperson said in a statement.

A Facebook spokesperson further told CNN that the company goes through a lengthy process and takes into consideration a number of factors before determining an individual to be “dangerous.” Such factors include calling for violence against a person due to their race, ethnicity, or national origin. It also takes into account whether that person is  identified with a hateful ideology and uses social media to incite harm against others and promote hate speech.

Minister Farrakhan, leader of the Nation of Islam, has expressed  anti  Semitic views. Loomer, Yiannopoulos, Watson  and Nehlan are right wing extremists who have been known to use social media to spread misinformation and incendiary content. Jones and his Infowars have routinely spread false propaganda that have included insisting that the Sandy Hook shootings were a hoax. Twitter, YouTube, and Apple have also banned Jones and Infowars.

Facebook will further remove groups, pages and accounts created to represent the banned individuals if it is found that the individual is participating in the effort. Any account that shares Infowars content will have the content removed. The platform just recently unveiled a new design to the platform. It will allow users more privacy and new accommodations for their settings.

(Facebook) “using people’s understandable anger over the company playing fast and loose with their personal data to push a ‘privacy’ focus which is just a fancy way to hide the other big problem on the platform and evade journalists and watchdogs.There are very nice groups… but some are also very very dangerous and make the world worse,” NBC’s Brandy Zadrozney said of the change.

Josh Russell, a misinformation and extremism expert, posted a Twitter thread on Wednesday about the dangers of social media. He detailed hoe Instagram failed to contain Russian misinformation campaigns.

I want to circle back around and keep mentioning this, while facebook and twitter have improved somewhat #Instagram still remains full of conspiracy theorist, hate speech, and russian propaganda/disinformation.