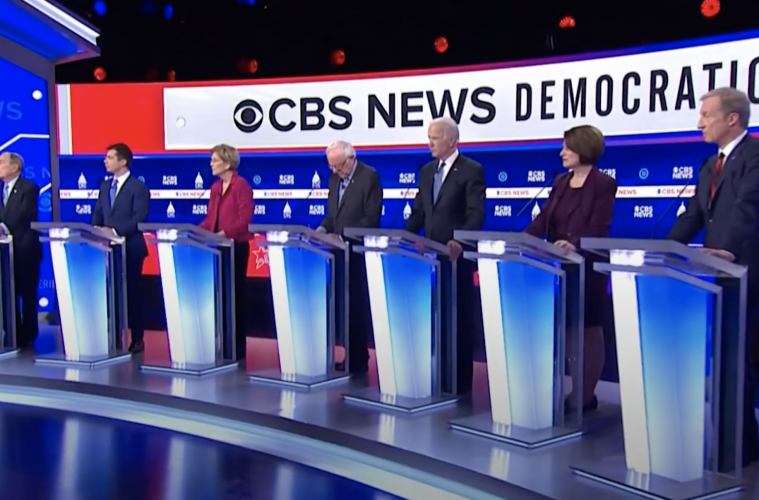 Tom Steyer’s claim to be the only Democratic presidential hopeful to believe in reparations is false.

Steyer, the billionaire hedge fund manager and philanthropist stood on the Democratic debate stage in South Carolina Tuesday night to say, “I believe I’m the only person on this stage who believes in reparations for slavery.”

Merriam Webster defines reparations as, “the payment of damages specifically : compensation in money or materials payable by a defeated nation for damages to or expenditures sustained by another nation as a result of hostilities with the defeated nation.” Steyer isn’t the only democratic presidential hopeful to promise he would distribute money to the black community after years of slavery and systemic racism that followed.

Here is a run down on all of the democratic candidates position on reparations:

After the debate in South Carolina on Tuesday night, Steyer revealed his plan to give $125 billion dollars to Historically Black Colleges and Universities to help black people make more educational strides. While every candidate has spoken in favor of researching what reparations would look like, Steyer says this time of commission would be a waste of time.

“A commission to study is a commision to delay,” he told CBS correspondents after the debate. “I’m talking about a solutions oriented group to start on day one to not discuss whether to do it, but when best to do it.”

During the debate, Steyer explained why he was going so hard for reparations.

Sen. Elizabeth Warren, D-Mass has spoken in favor of reparations on the campaign trail, citing the importance of giving back to the generations of black Americans who have been affected by slavery.

“We must confront the dark history of slavery and government-sanctioned discrimination in this country that has had many consequences including undermining the ability of Black families to build wealth in America for generations,” Warren has said in a statement to Reuters. “Black families have had a much steeper hill to climb – and we need systemic, structural changes to address that.” she said in the statement.

On her website, Warren introduces plans to help fill financial gaps in housing and entrepreneurship that exist in black communities.

“My housing plan will help families living in formerly redlined areas buy a home and start building the kind of wealth that government-sponsored discrimination denied their parents and grandparents,” the website states. “My plan for entrepreneurs of color will level the playing field by creating a new program with $7 billion in funding to provide grants to entrepreneurs of color.”

Sen. Bernie Sanders, D-Vt., has spoken out against racism but also opposed the idea of reparations. While he has supported more research being done about the topic, Sanders explained why he does not want to just blindly give money to the black community.

“Here’s my fear about reparations, and I understand the issue, and I’m on board the legislation that will study the issue,” the Vermont senator previously said at an NAACP convention. “Here’s my fear: The Congress gives the African American community a $20,000 check, and says, ‘Thank you, that took care of slavery, we don’t have to worry about anything more.’ I think that’s wrong, I want to build, rebuild the distressed communities in America.”

Former South Bend Mayor Pete Buttigieg has his own plan for reparations called The Douglass Plan which is outlined on his website.

“Pete has already committed to creating a commission to propose reparations policies to Congress,” the website states. “The Douglass Plan, which is a complement to any potential reparations proposals, aims to provide the scale and scope necessary for true nationwide restorative justice. Its policies touch every facet of American life, and like the values animating Pete’s campaign, reflect the principles of Freedom, Security, and Democracy.”

Sen. Amy Klobuchar (D-Minn.) has not supported the idea of reparations. Instead, she has approved of investing in communities impacted by racism.

“What we can do is invest in those communities. Acknowledge what’s happened. … Making sure we have that shared dream of opportunity for all Americans,” she said during an interview on NBC’s “Meet the Press.” “…It doesn’t have to be a direct pay for each person.”

Former Vice President Joe Biden has been on record opposing the idea of reparations.

A spokesperson for his campaign revealed that Biden “believes that we should gather the data necessary to have an informed conversation about reparations, but he has not endorsed a specific bill.”

Former New York City Mayor Mike Bloomberg has supported H.R. 40, the House bill that calls for formal studies to be done about reparations. He has also spoken about plans to give $70 billion to the  “100 most disadvantaged neighborhoods,” while creating 1 million new black homeowners and 100,000 new black-owned businesses.

“The exploitation worked exactly as it was designed to — slavery, sharecropping, Jim Crow, segregation and redlining,” Bloomberg said at the Vernon Chapel AME Church earlier this year. “For hundreds of years, America systematically stole black lives, black freedom and black labor. Well, it’s past time to say enough — and to damn well do something about it.