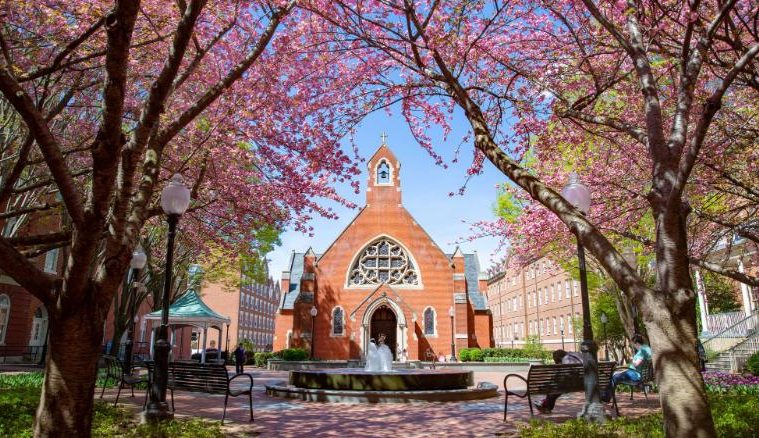 Georgetown Students Vote In Favor of $27 Fee For Slavery Reparations

Georgetown University may become the first school in the nation to mandate a reparations fee for descendants of slaves as students voted overwhelmingly to approve such a measure.

The Maryland Society of Jesuits sold 272 slaves in 1838 to help stabilize the school’s finances. The revenue would amount to $500,000 in today’s currency. A group of students now want descendants of those slaves to receive compensation.

CNN reported that The GU272 Advocacy Team pushed the student government a bill that would create a new $27.20 fee every semester for all Georgetown undergraduates. The fee would go toward a reconciliation fund, which would be overseen by a board of students and descendants of the 272 slaves sold in 1838.  Funds would “be allocated for charitable purposes directly benefiting the descendants of the GU272 and other persons once enslaved by the Maryland Jesuits.”

A vote was held Thursday evening on the referendum and passed by a 2 to 1 margin.

Eliza Dunni Phillips is a sophomore at Georgetown and a member of the GU272 Advocacy Team. Last summer, she interviewed descendants of slavery for the student paper.

“The vestiges of slavery are still so evident, and so many of the African Americans whose ancestors were enslaved are still so disenfranchised,” Phillips said. “It’s not enough to say sorry. Georgetown has to put their money where their mouth is and invest into the descendant community.”

Robert Nishimwe, a freshman, has spent the past few days campaigning for the measure. He felt that undergraduate students had to be leaders on the issue. He criticized Georgetown for not doing enough.

“We cannot just stand by,” Nishimwe said. “It’s us trying to move the goal post of where the administration is and the actions they have taken or the lack of action.”

The enthusiasm for this reparations fee was not shared by all students. Hunter Estes, a senior at Georgetown, voted no against the proposal. Estes felt it was morally wrong to impose the fee on all students and that there was a lack of transparency.

“Morally, I’m opposed to mandating an entire student population to pay a compulsory fee,” Estes said. “You can’t attach a financial number for the problem of slavery. You can’t say that this will account for it.”

The measure must go before the board of trustees because it involves proposed changes to tuition. Georgetown will ultimately have to approve the reparations fee.

“Student referendums help to express important student perspectives but do not create university policy and are not binding,” Matt Hill, the university’s media relations manager, told ABC News in a statement. “The university will carefully review the results of the referendum, and regardless of the outcome, will remain committed to engaging with students, Descendants, and the broader Georgetown community and addressing its historical relationship to slavery.”