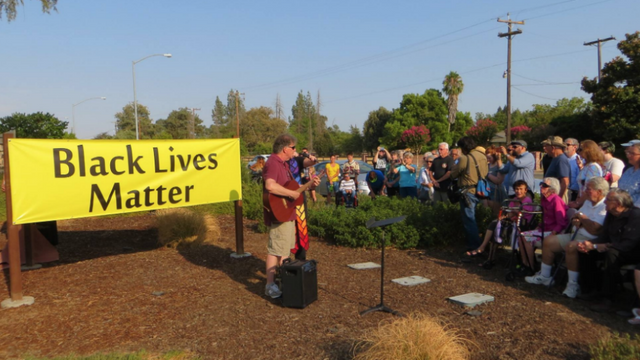 The Unitarian Universalist Church of Fresno in California has filed a lawsuit over being dropped as a polling place because they carried two “Black Lives Matter” banners.

The California based church filed an official complaint with American Civil Liberties Union (ACLU). They accused county clerk Brandi Orth of interfering with the church’s free speech.  Rev. Tim Kutzmark, minister of Unitarian Universalist Church of Fresno, refused Orth’s request to take down the Black Lives Matter banners that stand 200 feet away from the church. In response, Orth removed the church as a polling site.

The church believed they were now being punished and this retaliatory action “violate the First Amendment by singling out Plaintiff’s messages for disfavor because of the views expressed in those messages.” According to the Washington Post, A voter in the predominantly white neighborhood of Fresno complained to Orth’s office.

“Why it was okay to have a Black Lives Matter (a known domestic terrorist group) sign in front of our polling place,” the court documents obtained by The Washington Post read.

In the filing, Unitarian Universalist denied that it was advocating for any political candidate or policy.

“The Church’s Black Lives Matter banners were not electioneering,” the complaint stated. “They did not advocate for or against any candidate or measure on the ballot, and they were displayed more than 100 feet from the polling place at the Church.”

The ACLU argued that the church’s advocacy was addressing societal issues, especially those in the region they are located in. Racism and high Black  infant mortality rate among are some of those stressors on the community.

“The Church is committed to examining its own white privilege and to acknowledge that many of its members have benefited from this privilege their entire lives — knowingly or unknowingly, voluntarily or involuntarily,” the lawsuit states. “The church is committed to being an ally to Fresno’s Black community and to lift up calls for racial justice and equality in Fresno.”