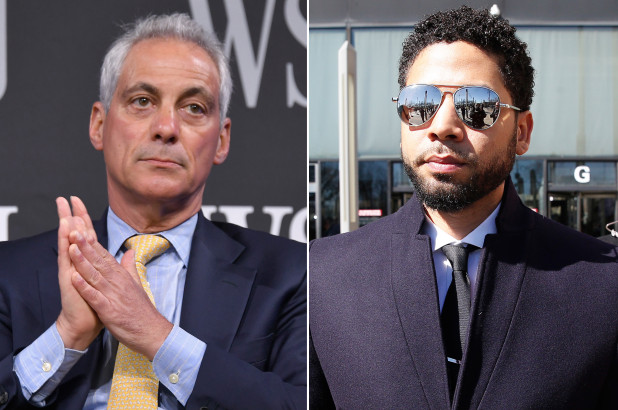 Emanuel  appeared on Good Morning America Wednesday to double down on his anger over the Illinois State Attorney’s office dismissing 16 charges against the 36-year-old actor. Following the move, he stated that it was a “whitewash” to justice and told ABC News chief anchor George Stephanopoulos on GMA that there was more to this story than being made public.

“He’s saying he’s innocent and his words aren’t true,” Emanuel said. “They better get their story straight. This is actually making a fool of all of us.”

Emanuel said he wanted to understand why Smollett’s forfeit of his $10,000 bond  and two days of community service at Operation PUSH, the non-profit Chicago community organization founded by the Rev. Jesse Jackson, was enough to satisfy prosecutors. The mayor said that Smollett received preferential treatment because he is an actor.

“Especially in a city that embraced not only him as an actor but more importantly the values of being whoever you are, whoever you love, whatever your background is, you have a home here. He took that, turned it around and tried to self-promote himself. And the fact is, he’s walking around with no sense of contrition, no sense of remorse, and the fact is also the state’s attorney is saying he’s actually guilty of this hoax, and he’s walking around saying, ‘No, I’m innocent,’” he said.

Tina Gladian, an attorney for Smollett, defended her client. She said if the case had been stronger, the state would have pursued the charges which were too much in her opinion.

“I’m saying their actions speak louder than words. They could have proceeded in a variety of ways. We were ready to move forward. We appeared in court and pled not guilty. We were ready to fight the charges and they’re the ones who voluntarily discontinued the matter, so I think that speaks volumes,” Gladian said.

Gladian also continued to maintain his innocence and the veracity of his account. She said The “Empire” actor was attacked in the early morning of Jan. 29 in Chicago.