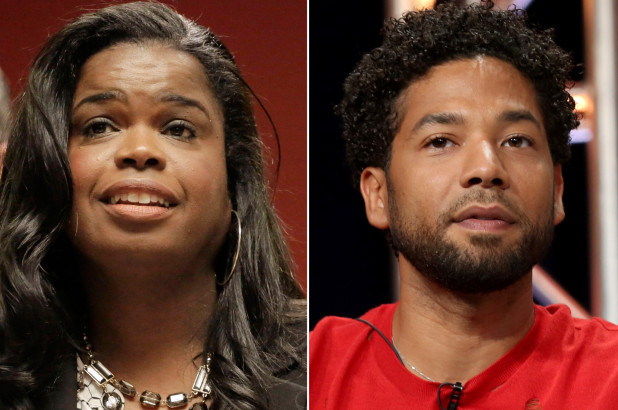 Kim Foxx, Cook County’s top prosecutor, said Saturday that she would not resign from her position due to a backlash by the Chicago police union over the decision to drop charges against Jussie Smollett.

Foxx spoke at Rev. Jesse Jackson’s Rainbow PUSH Coalition and said she was “undaunted” by the criticism. It has been two weeks since her office dismissed charges against the “Empire” actor. He had been indicted by a grand jury in Chicago on 16 felony counts after allegedly lying to police about being the victim of a racist and homophobic hate crime in March.

Mayor Rahm Emanuel and the police unions were angered by the decision to drop all charges and the city announced April 4 that it was drafting a lawsuit for $130,106 against the actor. The administration and police unions also believe Foxx may have acted inappropriately.

Foxx had recused herself from the Smollett case because of a prior conversation with one of Smollett’s relatives. She had doubts about whether the prosecution’s case was strong enough to proceed. Foxx also took exception to her integrity being questioned.

“I think we have to ask ourselves, what is this really about?” Foxx said. “As someone who has lived in this city — who came up from the projects of this city to serve as the first African-American woman in this role — it is disheartening to me, and to the women and men who I represent … that when we get in these positions, goal posts change.

Foxx wanted those who disagreed with her to show more professionalism. Kevin Graham, president of the Fraternal Order of Police Lodge 7, called on Foxx to resign two days before her appearance. He cited a “no confidence” vote.

“I stand with our partners in law enforcement every day. I will never speak ill about our partners in this work,” Foxx said. “And even though there are challenges between any relationship, you have never seen the Cook County state’s attorney stand at any podium, stand in any room, and disrespect or disregard any of those partners.”

“The FOP is the sworn enemy of black people,” Rush said.

Watch the video of the press conference below.