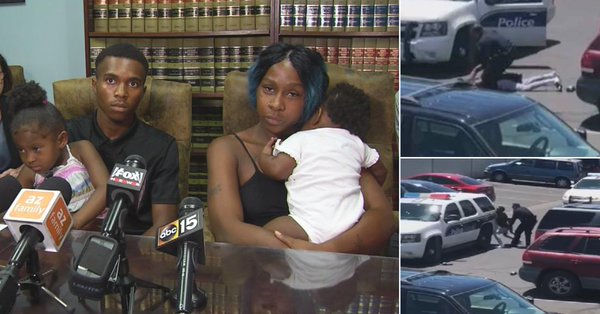 A family in Phoenix, Arizona is planning to sue the police department for $10 million, alleging that cops used excessive force and threatened to shoot them in response to a shoplifting incident that was captured on tape.

AZ Central reported that Dravon Ames, 22, and his pregnant fiancée, 24-year-old Aisha Harper were pulled over by police near 36th and Roosevelt streets on May 29. The couple were then held at gunpoint and assaulted despite not being resistant. Cops threatened to shoot them because their 4-year-old daughter walked out of a store with a doll from a dollar store without their knowledge.

“You’re going to get f–king shot!” one officer is heard yelling.

Footage of the incident has now gone viral.

“Next thing you know, a police officer . . . comes up, open the door, banging on the window with a gun, saying he’s gonna shoot us in the face, telling us to get out of the car,” Ames said during a press conference Wednesday.

“The situation shouldn’t have happened,” Harper said. “It was very scary and it was all over a doll.”

On Thursday, the couple filed a notice of the claim which is a precursor to a suit. The officers who confronted Armes and Harper that day are being accused of  battery, unlawful imprisonment, false arrest and infliction of emotional distress in addition to violating their civil rights. It also detailed horrific details of the encounter.

“He told the father to spread his legs, which the father did,” the notice of claim read. “The officer kicked him in the right leg so hard that the father collapsed, and then the officer yanked him back up. He kept his knee between the father’s legs. He punched the father very hard in the back for no reason.”

Former Attorney General Tom Horne is representing the family. He has asked for $2.5 million for each of the four claimants to settle the claim.

“We’re talking about a little doll that’s worth maybe $5 and the horrors that came from the overreaction to that,” Horne said.

“The officers involved have not been publicly identified and the department confirmed the incident is under review.

“The Phoenix Police Department takes all allegations of misconduct seriously and for this reason, this incident is currently being investigated by the Professional Standards Bureau,” Sgt. Tommy Thompson said in a Facebook post.