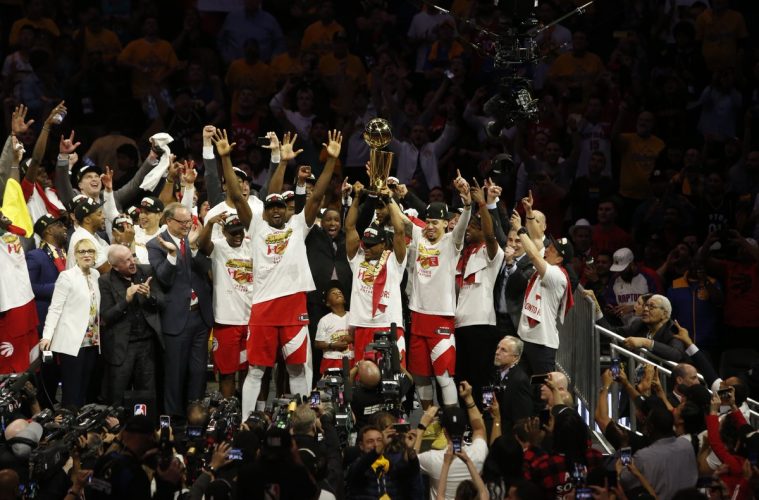 The Toronto Raptors won their first NBA championship, dethroning the Golden State Warriors with a 114-110 victory Thursday in Game 6 of the Finals at Oracle Arena on Thursday.

Toronto Raptors have now won the first championship in their franchise history and denied the reigning Warriors a 3 peat. Kawhi Leonard propelled the team to the historic win and was named Finals MVP. The recognition has given Leonard the distinction of being the only player to win Finals MVP with a team from each conference. He previously earned the honor playing for San Antonio five years ago.

During this finals, Leonard averaged 28.5 points per game on 43 percent shooting. He also led other players in led in points, rebounds and steals over the last two months. His domination came after he missed the majority of the  2017-18 season with the Spurs due to an injury.

“I just kept working hard, working hard, and had my mind set on this goal right here,” Leonard said. “I came to a team, a new coast — that mindset was the same as mine, trying to get that Larry [O’Brien championship] trophy there. And this is what I play basketball for; this is what I work out for all summer [and] during the season. And I’m happy that my hard work paid off.”

Leonard joins other formidable players in  Kareem Abdul-Jabbar(Bucks and Lakers) and LeBron James (Cavaliers and Heat) in winning the Russell Trophy with two teams. Leonard drew praise from his coach and teammates for his efforts.

“I think he’s the best two-way basketball player in the NBA,” Raptors guard Kyle Lowry said. “He just goes. You know, I’ve seen some stuff from him this year that you just say, ‘Wow.’ You do. You say, ‘Wow.’ You appreciate the work that he’s put in. He works extremely hard at his game and works extremely hard on his body. And he loves this basketball thing. Loves it.”

Raptors coach Nick Nurse and Leonard both joined the Raptors this season. Nurse was humbled he was able to share in the celebration with the 27-year-old shooting guard.

“Without a doubt, the best thing about this thing is that somehow I wound up on the sideline getting to watch this guy play up close,” Nurse said.

Leonard will now enter free agency and  has until June 26 to exercise a $21.3 million player option for next season. Post game, the two time NBA champion demurred on answering questions about his future and wanted to enjoy the present.

“I’m ’bout to enjoy this with my teammates and coaches, and I’ll think about that later,” Leonard said.