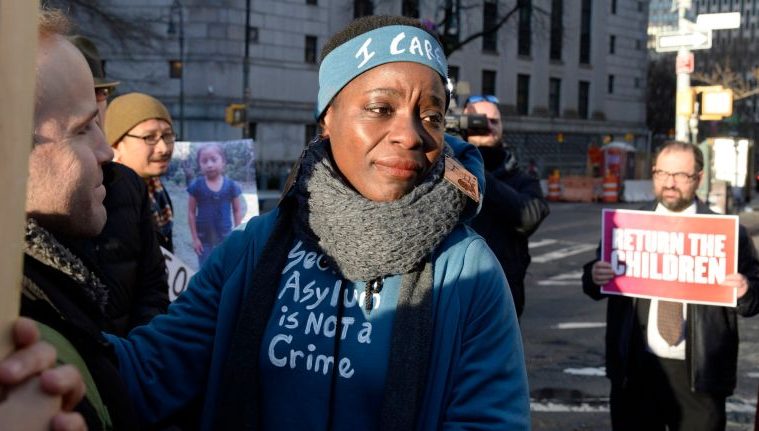 Patricia Okoumou, a naturalized Congolese immigrant from Staten Island, will not be going to jail for climbing the Statue of Liberty last Fourth of July in protest of the Trump administration child separation policies.

AM New York reported that U.S. Magistrate Gabriel Gorenstein ordered Okoumou to serve 200 hours of community service Tuesday. She was also placed on probation and ordered not to commit any more protest crimes. If she breached any of these conditions, the 45-year-old would be imprisoned.

“The defendant apparently thinks her cause outweighs any risk she creates for others,” Gorenstein said, citing hazards to police and tourists. “She did not climb to rescue a child in danger on July 4 . . . The law that prohibits climbing the Statue of Liberty and putting others in danger is not unjust.”

Okoumou appeared in court with her face covered in tape . She deemed the action as an expression of her freedom of speech. She refused to stop protesting and declared that “God is taking notice” of American moral decay.

“I was not frightened by the height of the Statute of Liberty, I was frightened by the depth of moral bankruptcy of your country,” she told the judge. “… I do not need the probation and I do not belong in prison because I am not a criminal.”

The judge admonished her lack of remorse over her actions in July 2018. She scaled the Statue of Liberty  led to the evacuation of Liberty Island. Gorenstein said that he threatened to push over a ladder an officer was using to try to get her to come down. In December, she was convicted of trespass, disorderly conduct and interfering with government administration. She could have faced 18 months in prison for her conduct.

“A person with empathy would have said, ‘I’m sorry I risked the lives of others,’” he said. “But she did not.”

Okoumou left the new York courtroom to a throng of supporters and still did not have any regrets.

Her attorney Lawyer Ron Kuby  seemed to indicate that Okoumou would not abide by the conditions of her sentence.

“There are no guarantees in this world,” Ruby said.