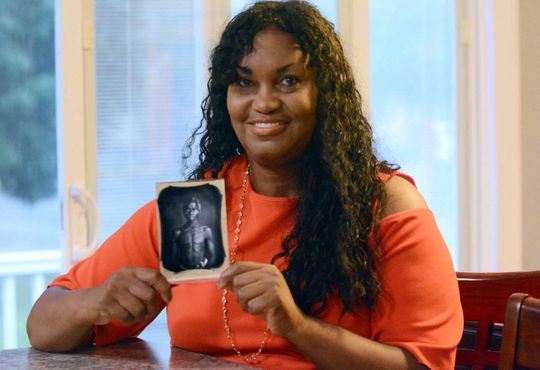 Tamara Lanier sued Harvard University to gain ownership of photographs of her enslaved family members that the school has financially profited from for years.

Lanier has claimed the great-great-great granddaughter, Congo Renty. He has appeared in many images that depict America’s history of slavery and often with his daughter, Delia. The two are stroipped naked and pictures were taken from several angles for the purpose of proving that African americans were inferior to whjite. Former professor Louis Agassiz, a biologist, had the pictures commissioned to support the theory of polygenism.

Lanier has now filed suit against Harvard over the photos. She claimed the university had engaged in wrongful seizure, possession and monetization of the images. Furthermore, Lanier said Harvard ignored her request that the college “stop licensing the pictures for the university’s profit” of her ancestor whom she referred to as Papa Renty.

Harvard owns the photos but Lanier is demanding that they are returned to her and unspecified damages are paid. In an interview with USA Today, she explained approaching Harvard in 2011 with proof of her lineage but has been rebuffed.

“This will force them to look at my information. It will also force them to publicly have the discussion about who Renty was and restoring him his dignity,” she said.

Lanier’s is being represented by the law firm of Benjamin Crump, noted civil rights attorney and Connecticut-based attorney Michael Koskoff where Lanier lives.  Crump said this suit was a landmark one. Crump said it was one of the most important since Brown vs. Education.

“These images were taken under duress and Harvard has no right to keep them, let alone profit from them,” Koskoff said. “They are the rightful property of the descendants of Papa Renty.”

Lainer said that it was time for Harvard to do right by the ancestors of Renty and not continue to enrich themselves.

“For years, Papa Renty’s slave owners profited from his suffering – it’s time for Harvard to stop doing the same thing to our family,” Lanier said.