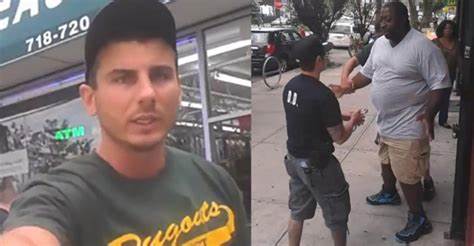 Pantaleo Was Fired, But The Garner Family Wants Him To Go To Jail

Nu OriginsAugust 19, 2019
News0 Comments 0
Daniel Pantaleo has been fired. Pantaleo is the officer responsible for the death of Eric Garner.

It has been five years since Garner was killed due to an inappropriate chokehold, and as of recently, there was a recommendation from an NYPD judge to terminate his employment.

Of note in O’Neill’s announcement, was that the blame was placed on Garner for his own death.

“The commissioner was trying to save face. Throwing little jabs here and there at both sides, Jewel Miller, Garner’s surviving girlfriend and mother of their 5-year-old daughter Legacy,” told Nu Origins.

“Our movement will continue to fight for black liberation, Miller said. “Once he’s in jail with a sentence that fits his crime [,] this will be a model standard for all of those fighting against racist police brutality.”

According to the New York Daily News, the city judge called Pantaleo “untruthful,” having denied he put Garner in a choke hold.

Although he never testified at his departmental trial, he was interviewed by the NYPD Internal Affairs, where fellow officers asked a series of questions.

“First, I found [Pantaleo] to be disingenuous when he viewed the video and denied using a chokehold, even though his actions were completely consistent with his own erroneous and strictive definition of the Patrol Guide prohibition,” the Judge wrote via The Daily News.

During a few different conferences, various family members took the stage to announce their responses to the commissioner’s decision to fire Pantaleo.

Daughter Emerald Garner told reporters at her conference that she’s thankful for the commissioner’s decision but felt the decision was five years too late.

#EricGarner's daughter tells reporters: "We will be going for the congressional hearings, we will be trying to reopen the case. We will be going after the rest of the officers involved." pic.twitter.com/D5uZq2in5y

“That’s half the battle, now send him to jail !!!!!!!!,” Miller stated on her Facebook page called The Legacy Eric Garner left behind – Legacy Garner.

Miller has a group of associates who engage supporters were quick to react to the announcement on social media. They engage supporters of their movement to participate in their charitable events such as an incoming, annual, back-to-school event.

She has more than 1,000 followers, and asked them to support her GoFundMe for Pantaleo’s family

On the five year anniversary of Eric Garner’s passing, Miller and group of protester tried to confront Pantaleo at his home address.

At her conference, Garner’s mother said Panteleo can get a new job, but she has lost a son. She told reporters she’s still pursuing Panteleo “for the long run.”

Reacting to Daniel Pantaleo's firing from the #NYPD, Gwen Carr, the mother of Eric Garner, says he can get another job.

Carr also vows to continue advocating for the other officers involved in the 2014 arrest to be fired. https://t.co/a45JMv1A62 pic.twitter.com/SHCEjyLqz0

Pantaleo’s supporters launched a campaign to support his family. The fundraiser states that negative press and decisions made on Pantaleo has impacted Pantaleo abilities to provide for his newborn and pay his bills.

The crowdfund also stated Pantaleo is “an officer in need that was only doing his job!” The page slightly alluded to the author of the page is a fellow officer as he calls Pantaleo “a brother in blue!”

According to Miller and associates, Pantaleo received a salary increase after the death of Garner.

On July 17, 2014, Pantaleo wanted to place Garner under arrest for allegedly selling untaxed cigarettes, commonly referred to as loosies. Garner, who felt framed for a crime he didn’t commit, resisted Pantaleo’s handcuffing. The two wrestled to the ground.

Garner’s friend, Ramsey Ora, recorded the incident as Garner and Pantaleo almost crashed into nearby storefront’s glass window. Pantaleo applied a chokehold on Garner, a man with asthma, which triggered Garner’s breathing problems and later a heart attack.

During the fatal encounter, Garner could be heard telling officers “I can’t breathe” 11 times before police decided to provide him with an ambulance. Paramedics waited to give Garner oxygen, but Garner died after arriving at a local hospital.

Medical examiners ruled Garner’s death as a homicide because it was Pantaleo’s choke hold that caused his cardiac arrest.