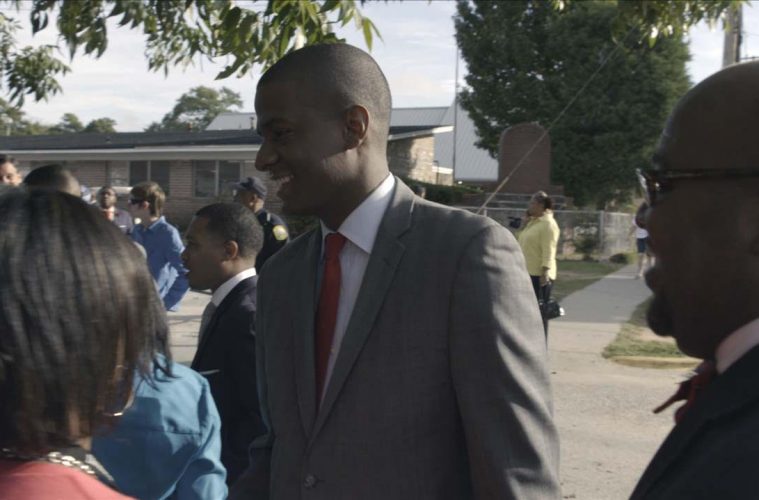 While I Breathe, I Hope Chronicles History-Making Southern Political Run of Bakari Sellers, Once the Nation’s Youngest Black Elected Official

While I Breathe, I Hope Chronicles History-Making Southern Political Run of Bakari Sellers, Once the Nation’s Youngest Black Elected Official

Get a rare inside look at the modern political landscape as director Emily Harrold’s While I Breathe, I Hope comes to Stuart Cinema & Cafe in Greenpoint from on August 20th. Tickets are $10 for adults, $5 for seniors.

An official selection at the DOC NYC Festival, the documentary follows attorney and CNN pundit Bakari Sellers, a young Black Democrat aiming to bring positive change to a historically red state as he runs for lieutenant governor of South Carolina. We witness Sellers on the national stage after the Charleston church shooting alters the American political discussion.

Named for South Carolina’s motto, While I Breathe, I Hope, directed by Emily Harrold, explores a question dominating today’s headlines: Can a young Democratic politician help mend the rifts of a divided nation?

Youthful, energetic and filled with purpose, Sellers also has a legacy of activism. His father Cleveland Sellers was central to one of the state’s most tragic Civil Rights events, the 1968 Orangeburg Massacre, where he was wounded and arrested for protesting segregation. Bakari Sellers became the youngest Black elected official in the U.S. when he was elected to the South Carolina state legislature at the age of 22.

Through While I Breathe, I Hope, audiences get a personal and sobering look at Sellers’ 2014 grassroots campaign as he sets his sights on the state’s lieutenant governorship with an aim to bring equal rights, quality education, healthcare, and more to his fellow citizens.

Yet as a presidential campaign upends normal national politics and a local tragedy shocks the country, Sellers and viewers will question whether the courage of a new generation is enough to combat the ghosts of America’s past.

“This film shows me at my highs and my lows. It is my truth, and I hope it will inspire everyone who sees it to get more involved in creating the change they want to see in the world,” said Bakari Sellers.

“I’m thrilled to be able to bring this film and Bakari’s story, which is very much a story of the history of my home state, South Carolina, to audiences in New York,” said Harrold.

Radio personality Charlamagne tha God, is an executive producer of While I Breathe, I Hope (2018, 72mins), along with Marco Williams, Jedd Canty and Karen Kinney. The Stuart Cinema & Cafe is located at 79 West St. in Brooklyn. Showtimes are Sat 8/17 at 5pm, Sun 8/18 at 1pm, Mon 8/19 at 8pm and Tues 8/20 at 4pm. A Q&A with Harrold follows each screening. For details or tickets, visit stuartcinema.com or call (347) 721-3777. For more on these and upcoming screenings follow the film’s team on Twitter at @BakariDoc and on Instagram and Facebook at @BakariSellersDoc.

Documentary filmmaker Emily Harrold is from Orangeburg, South Carolina. Her films have screened at the Tribeca Film Festival, the Melbourne International Film Festival and the Telluride Film Festival. She produced the award-winning documentary feature, Monkey Business: The Adventures of Curious George’s Creators,  (2017) and her recent film credits include CNN’s The End: The Last Days of the Obama White House, PBS’s The White House: Inside Story.

Bakari Sellers made history in 2006 when, at just 22 years old, he defeated a 26-year incumbent State Representative to become the youngest member of the South Carolina state legislature and the youngest African American elected official in the nation. He’s followed in the footsteps of his father, civil rights leader Cleveland Sellers and was named to TIME Magazine’s “40 Under 40” in 2010 and to “The Root 100” list of the nation’s most influential African-Americans in 2014 and 2015. A CNN political commentator, he practices law in Columbia, South Carolina and is married to Dr. Ellen Rucker-Sellers.