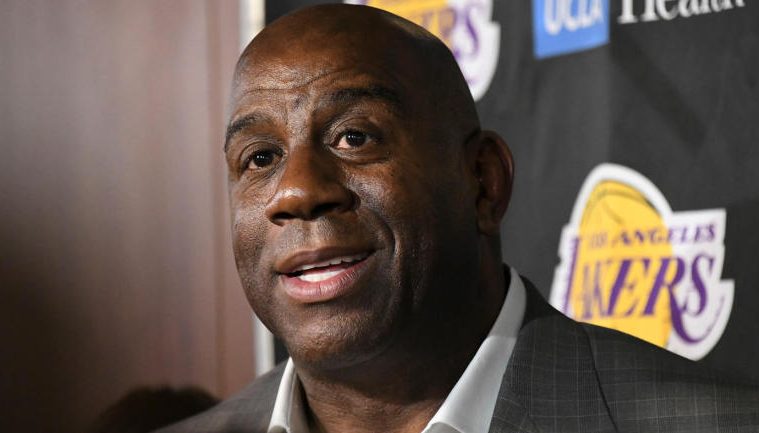 The NBA legend, who played point guard for the Lakers for 13 seasons, stepped down from leading the team after two underperforming seasons. The once fabled team has not made the playoffs since 2013. Johnson announced he would return to a simpler life before the Lakers’ regular-season finale against the Portland Trail Blazers, a 104-101 loss. He choked back tears as made his intentions known.

Johnson added that the decision to leave the organization would put him in a better mental space. He desired to return to his previous life before assuming the role in February 2017. He made up his mind Tuesday morning, a day after he and Buss had a three-hour meeting.

Johnson said that he had not informed Buss or general manager Rob Pelinka of his decision before talking to reporters. He believed the brass would talk him out of it. However, he told ESPN’s Rachel Nichols that he would be around whenever Buss needed him.

Johnson also denied that his choice to leave had anything to do with Laker’s head coach Luke Walton. Buss and Pelinka are supporters of Walton despite that he finished the season 37-45 and went 35-47 last season, putting his job on the line. Johnson had been prepared to fire Walton.

“Yeah, I was preparing to make that decision,” he said.

“But you know … it was going to be tough for her, because she loves him, loves me,” Johnson said of the dynamic with Buss, Walton and himself. “And I was already saying, you know what? Really, Earvin, are you really happy? So when I decided I wasn’t, I didn’t want to put her in a position like this. And so this was the right move to make. And I’ve never been so relieved.”

The Lakers locker room was described as “paralyzed” by ESPN. Lakers point guard Rajon Rondo said everyone was in shock.

“Nobody had an idea,” Rondo said. “I didn’t know if it was true or not. What shocked me is how everybody else is shocked. Because nobody knew.”

“I walked in … and thought LeBron had retired or something.”

Steven A. Smith alluded to Johnson being frustrated by the Lakers organization.

I don’t know what the HELL just happened with MAGIC JOHNSON!!!!!! pic.twitter.com/Ra9yRDpDYw

"Magic wanted to bring attention to the nonsense that has been sifting through the Lakers franchise like a virus."

Johnson said he was at peace with this decision. He likened his stint as being imprisoned.

“I’m a free bird and I’ve been handcuffed,” Johnson said. “And I don’t like that. … This is the right time. The right move. The right decision. I’m so happy. I’m a guy who always knows when things are right, and this is right. It feels good.”

Johnson also took to social media. He thanked the organization and said he’d be a Laker for life.

Thank you to Lakers owner Jeanie Buss, General Manager Rob Pelinka, Coach Luke Walton, the Lakers players & the entire basketball operations staff for the tremendous opportunity to serve as the President of Basketball Operations for the @Lakers. I will always be a Laker for life.

Watch the announcement below.