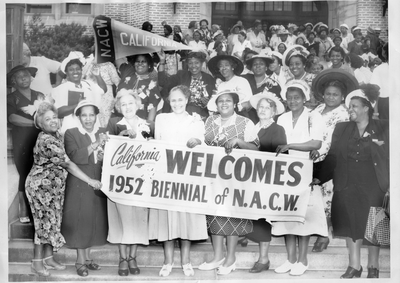 Lifting As We Climb: The National Association of Colored Women’s Fight for Racial and Gender Equality

On July 21, 1986,  a cadre of African American women launched the National Association of Colored Women (NACW); a merger between the National League of Colored Women and the National Federation of Afro-American Women. The organization’s members included Harriet Tubman, Ida B. Wells- Barnett, Frances E.W. Harper, Josephine St.Pierre Ruffin, Margaret Murray Washington and Mary Church Terrell who would become the first president of the body.

“Too long have we been silent under unjust and unholy charges; we cannot expect to have them removed until we disprove them through our selves,” Ruffin said during her speech at the first National Conference of Colored women in 1895.

Adopting the motto ‘Lifting As We Climb,’ the NACW objectives were to educate and protect the rights of women and children, secure and enforce civil and political rights for African-Americans, among others. To do this they began job training, fighting for wage equality and child-care. They raised money for kindergartens, libraries, orphanages, and assisted living homes, and also instituted programs that would help women moving from the south with affordable housing and job opportunities.

The founding members of the NACW were also part of the Suffragette movement and supported the fight for women’s right to vote. In 1912 – two years before the General Federation of Women’s Clubs – they endorsed the Suffragette movement. The NACW fought for both gender and racial equality, they spoke up against segregation and lynching in the South and also included black men in their fight for voting rights. They were supporters of the Civil Rights movements and financially assisted the Little Rock Nine during their fight for integration.

“The work which we hope to accomplish can be done better, we believe, by the mothers, wives, daughters, and sisters of our race than by the fathers, husbands, brothers, and sons,” Mary Church Terrell said in her first address as president.

By 1916, the NACW had established over 300 clubs and were quite active. They raised over $5 million in war bonds after the United States entered World War I.

In 1957 the organization changed its name to the National Association of Colored Women’s Clubs (NACWC).
They have continued the work began in 1896 and adapted to include current social issues. They currently run various youth programs for both boys and girls, assist high school graduates and college students with scholarship money and in 2010 they were named one of the top 10 non-profit organizations in the country by Ebony Magazine. The NACWC has grown and has five regional organizations as well as state chapters to promote their work.